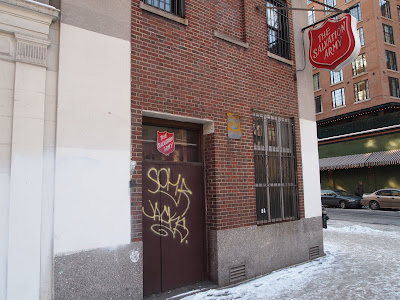 [February 2011, of course, because it doesn't snow here anymore]

And all was quiet for a few years. Until Jan. 11, 2011, when Lois Weiss at the Post reported that the France-based Louzon Group had bought the building and were planning on opening a new hotel here. Across the way from the Bowery Hotel. And two blocks from the then-Cooper Square Hotel (now the Standard East Village). Not to mention the rebranded Whitehouse Hotel and Hostel across the street. And close enough to the 569 hotels planned for the Lower East Side. 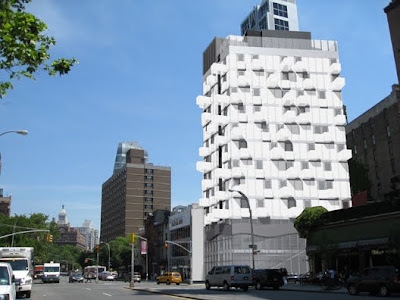 Then! The next rendering! Keep in mind: This is not a joke. 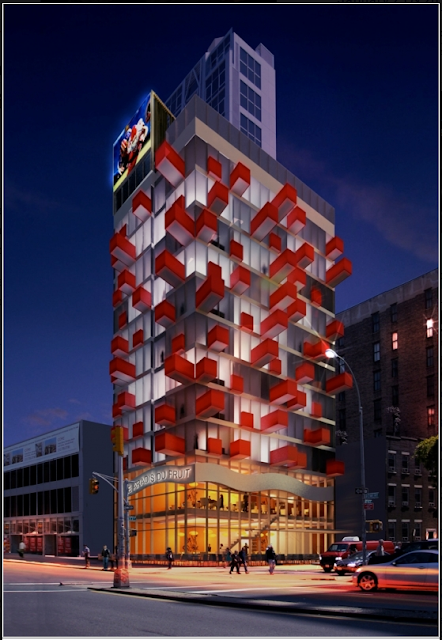 And yes — that's a Jumbotron up there.

As you'll recall, the reaction was... brutal? My favorite comment, via the EV Grieve Facebook page, came from Luc Sante:

It would be cheaper and more useful just to blow up the building and leave a 30-foot crater.

Anyway! Two years later, there's no sign of this hotel. (Which is a very good thing...) There's nothing on file for the property with the DOB. No demolition permits in the works. Nothing. 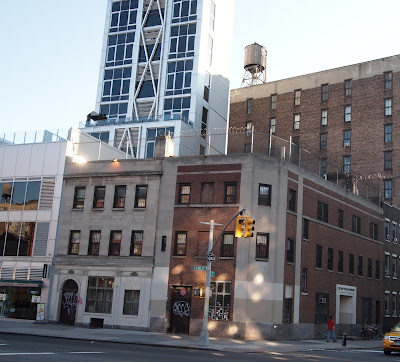 Did the Louzon Group changed its mind? They paid $7.6 million for the property. Anyone know what's going on with the space? Let us know via the EV Grieve email. 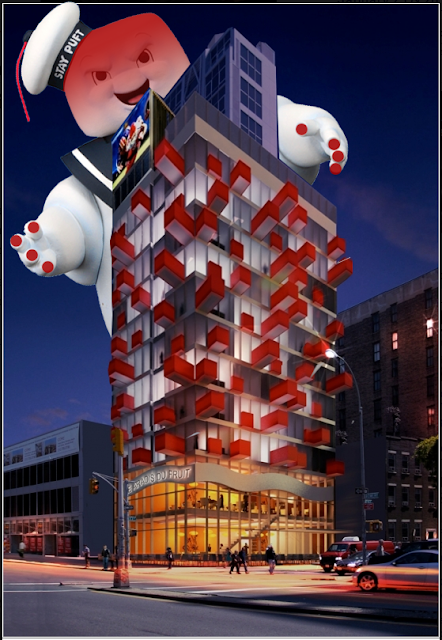 Why do the French hate us?
Posted by Grieve at 6:30 AM

Email ThisBlogThis!Share to TwitterShare to FacebookShare to Pinterest
Labels: 347 Bowery, because we need more fucking hotels around here, the Bowery

This building should cement the architect's reputation in NYC for designing chain hotels that stick out.

Fuck new hotels in the East Village and the rich assholes that want to stay there. Turn this building back into a Salvation Army shelter so people that really need the space have a place to go. There are other fire hydrants in the city for the well-off and fortunate to go piss on at their leisure.

Funny, with your post yesterday about the Death Star I started wondering what was happening with The Zit Building. Fingers crossed that the plans to build it have been popped.

The building looks like it has an archtuctural infection.

The pigeons would looove roosting and pooping on all of those red sores.

At least the poor people have been moved along and they won't bother us while we try to eat and drink and get in and out of cabs.

Do you think this blog ridiculed them into scrapping the idea? I really REALLY hope so!