On Avenue B, Epic City Pub will be 'the first gay pub in the East Village' 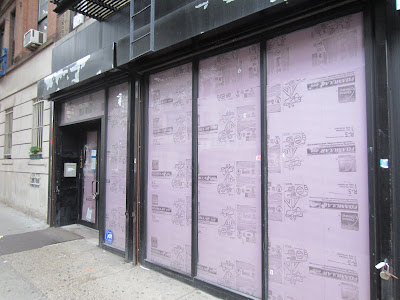 [14 Avenue B from last summer]

As previously mentioned ... The Urge Lounge, the gay bar/club that closed at the end of 2012 at 31-33 Second Ave., is moving to 14 Avenue B between Houston and East Second Street...

And the Urge folks have just shared a few details about the new space via Twitter...

We are moving to 14 Avenue B and our new name will be Epic City Pub,the first gay pub in the East Village. Date TBA

What changes or new things would you like to see do at our new location to be: 14 Avenue B @ East 2nd Street in the East Village.

Email ThisBlogThis!Share to TwitterShare to FacebookShare to Pinterest
Labels: 14 Avenue B, Urge Lounge

They'll get raided most likely, nothing is going to change other than to get worse.

NYC Council Speaker Christine Quinn, who continues to lead the Democratic field, was jeered at a National Action Network forum last night after reiterating that she would keep Ray Kelly as NYPD commissioner if she’s elected.

Are they in already, or do they have to go before the Community Board? Anybody know?

The CB3 approve their application last August (or maybe September)...

Fifty million cheers for the fine folks at urge!
The gays will save us now!!!

Isn't the Boiler Room on 4th St a gay pub?

So does that mean that every other pub is a "straight" pub?

After extensive, exhaustive online research, I still cannot exactly determine the difference between an American pub and a bar.

I miss Boysroom on Ave A that's now a "sports bar". If they only knew how many butt naked Go Go Idol contestants danced on that bar...

Are they saying somewhere that Epic City Pub will be "for gay people only"?

@Ken - you should duck into Shades of Green pub on 15th and Irving for a terrific shepards pie and a pint. They even keep rooms to let upstairs, like a public house used to!

"First"???? I think they're extremely confused.

I think a pub technically has to serve food, right? So Phoenix would not qualify. (They were lovely neighbors during Sandy, btw.)

But Queen Vic certainly would qualify, right? I mean I'm all for Epic City doing their thing but I'm not sure they're the first EV gay pub.

Anon 3:55 I miss Boysroom too! Michael Formika is such a wonderful East Villager. He's got a party at Phoenix on Wednesdays, too! I only wish I were still able to go out at night, but it's best for myself and society that I don't. :)

Walt, are you drunk? where / what said it was for "gay people only"?

Actually, I really hate the name though. A gay bar should have a good name. Like "Sir Lance a lot's" or "Ram Rod" or The Greased Pole" or "Brown Eyed Nellie's".

Nobody is gonna go there. The Cock has a happy hour now with Frankie.

It does't say ONLY, but it does specifically say 'New York's first gay pub." what I would like to know is, what makes it 'gay'? That's what's confusing.

But they still are not tenants yet of that space. They'll probably open in May. There's so much to be done to a place to open it, especially if they're putting in a kitchen.

I loved happy hour with Frankie! Miss him!

The name sounds like some bar in Minnesota or something. There's nothing gay or New York about it.

They can't have go-go boys where they are going. Community board over there said HELL NO! I don't know what they're gonna do. I only went there for that.

I'd say a pub serves food.

PLEASE re-think that name.
We do not need something called "Epic" here unless it's a movie theater.

It's a gay bar thank god for that no matter the name its a place for gay people to go people stop thinking so much and go drink everyone at the old urge was cool and crazy and fun. just go wherever u wanna go and have fun and be gay.

It better be Epic. It better live up to the name

"Epic City Pub" sounds like an oxymoron. And since most of the Urge customers seemed to not be from the neighborhood, I don't see them making the effort 3 blocks over, and not just a few steps from the subway.

First? The people of that bar need to get over themselves.

The cock has the bet go-go boys and SPERM SUNDAY'S rule!

Yeh the best happy hour is Frankies at the Cock
Where else in the East Village can you get 4 for 1's!!