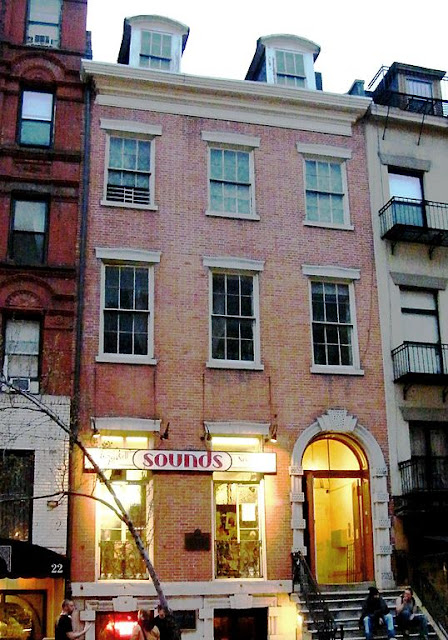 There's a new listing for a home at 20 St. Mark's Place, above one of our favorite places, the Grassroots Tavern ... (and above Sounds) ... and we always forget just how nice the residences are here...

Per the Douglas Elliman listing: 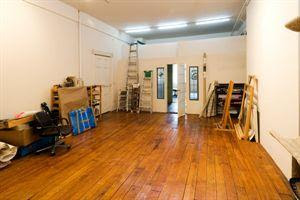 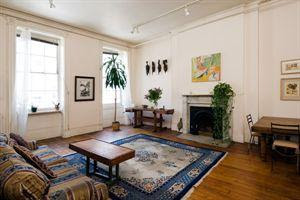 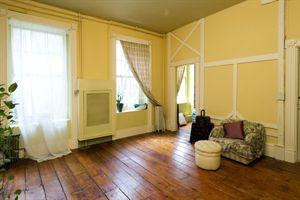 In case you don't know this building's history ... No. 20 is The Daniel LeRoy House, built in 1832 and landmarked in 1969 ... and added to the National Register of Historic Places in 1982. The historical marker out front reads:

This mansion was once part of the row that lined the entire brickfront. With its arched Federal-Barqoue doorway, grand proportions and original wrought iron handrailings at the stoop, it is now a rare survivor of a type, which because of its great cost, was never common. The row, one of the few ever built in this style in New York, was constructed in 1832, by Thomas E. Davis, a speculative builder. No. 20 was purchased by Daniel Leroy, brother-in-law of Hamilton Fish and son-in-law of Nicholas Fish, whose nearby home at 21 Stuyvesant Street is also a landmark.

Something to think about over your next $2 happy hour pint...
Posted by Grieve at 6:05 AM

God I love that building...anyone got $2 mil to spare?

So 45 years ago NYC was lucky enough to have an intelligent and enlightened Landmarks Preservation Committee, unlike the clown car full of nitwits currently debasing the office. Small favors.

Very nice abode, but that location will drive you crazy. Unless you don't mind being a shut-in. Those steps leading up to Sounds' door, always seemed really perilous.

If you were to live a bar, that would definitely be the one to live above. So extremely respectful to the neighbors at all times and just a wonderful old school establishment. Plus, cheap drinks, fresh popcorn, and live jazz on sundays!
<3 U Grassroots for keepin it REAL in the EV!

Such a lovely place and so glad it has those interesting details that too often get obliterated when management companies buy places and destroy anything that makes a place unique.

Wow, money gets you nowhere in the East Village