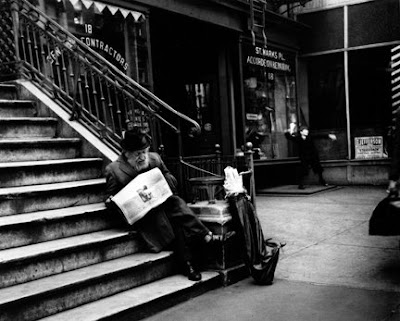 The book is due at the publisher next spring, and she is looking for some help.

My goal is to track down the best stories, photographs, and historical documents related to the street. I've been going through archives and conducting a few interviews a week, but I know I'm only scratching the surface. In the interest of efficiency, I'd like to invite anyone with St. Marks-related stories or pictures to share to drop by the lovely Neighborhood Preservation Center on March 10th, anytime between 12 and 4, for a St. Marks Place story-gathering event.

I recently spoke with Calhoun about the book, and what it was like growing up on the block.

"I didn't know any different. I thought it was totally normal. I was used to stepping over bodies walking down the street or being offered drugs every five steps," she said. "I did have this experience when I went to visit cousins in Ohio when I was 11 years old. They had a kiddie pool in the backyard and we went to a drive-in movie theater. And we got root beer floats, which I never had before. I came back fuming at my parents. I was like, What the fuck — you never told me any of this! I felt totally deprived!"

The book will explore the history (going back to the 17th century) and mythology of the street. So far she has talked with more than 100 people about the block and its meaning to them. 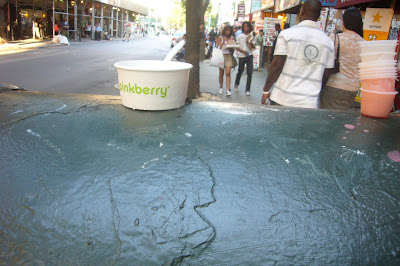 Coney Island High punk rock shows in the mid-late 90's before it closed -- that was the best time for me. I was in high school and I thought St. Mark's was the center of the universe. See a show, grab a slice of pizza, walk down to the park, etc. Ah to be (very) young.

All of my books are either about the East Village in the 1950s-60s or Times Square, whichever I'm writing about at the time, they go back and forth. You can find my 20 or so novels, novellas on Amazon. Great that your book is coming out, will keep an eye on it ;)

"My theory is that people coming out of karaoke bars or yogurt shops ... this is going to be some new wave of culture that we don't know about and won't even know about until it's over."

I guess we'll find out somewhere in future, but a culture based on fro-yo stores and karaoke bars doesn't sound to me like a major event on the historical timeline. Whenever we do actually look back on this time in the East Village it's probably going to be with great disappointment.

My frame of reference only starts in the late 80's, but I've never seen St. Mark's as being anything other than an open air mall for NYU students. Always liked Grassroots Tavern, though.

My memories of st marks also date back to high school in the 70s-80s. Girls threatened to beat me up on the subway due to manic panic purple hair. I still have the vintage beaded sweater I bought for an outrageous $7 at trash & vaudeville, talked into by Frenchy back when he was had not a line in his face, and he still seemed way older. Feels like yesterday. Other times it feels like 1000 years ago.

Yes! I Agree! (CIH) Was the best place to hang back late 90's Miss it very much with the great bands, drinks, punkers and all folk hanging out on St. Marks till wee hours of morn' PS The drinks at CIH were amazing just like the people Miss Punk Rock Land *TwintasticsByDesign*NYC

I really enjoyed the book but left it - as I did with Elizabeth Currid's "The Warhol Economy" - feeling a little dissatisfied and vaguely annoyed. It's a great history of the street, but a strangely face-value one that goes along with the general tide of the neighborhood, ending with a "things are great and we're all happy!" summation fitting with a Koch-era I Love New York ad. Giuliani gets trumpets and bells as his cops crack down, and the economic machine behind it all gets kind of lost, and I remember it all somewhat differently. But it's really well done, given all that. Enjoyed it, but wanted to throw it across the room sometimes.