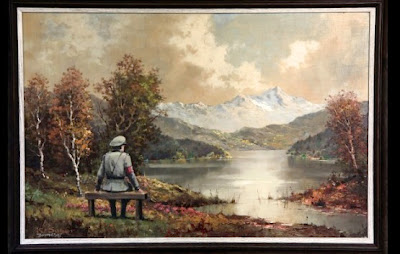 As you may have seen, Banksy donated a thrift-store-style painting to the Housing Works store on East 23rd Street ... it was a painting that he apparently purchased earlier for $50. But he added the Nazi solider sitting on the bench ... and titled it "The banality of the banality of evil" (an homage to the writer/philosopher Hannah Arendt).

For their part, Housing Works, which has operated scatter-site housing, harm reduction services and a supportive residence and primary care clinic for homeless NYers with HIV/AIDS since 1991, put the work up for auction.

Meanwhile, Banksy Month in NYC is over. The Vulture ranks all his work during his street residency.
Posted by Grieve at 11:05 AM

Email ThisBlogThis!Share to TwitterShare to FacebookShare to Pinterest
Labels: Banksy

I really love this. What an excellent way to use his art.

Housing Works is a great charity! Congrats to them and the people they help!

Housing Works sure banksy on that painting. Yes, I just said that. Aren't I punny?

I was the other bidder, the painting did not sell for 615k. Please see my comments in the Guardian, or see my open letter to Banksy at www.williamemling.com Hopefully by shedding light on this others will step in with donations to benefit Housing Works. As for the fake bids? Right down to the back story of the painting was false. Matt called me and told me the whole story.