Flashback: I'm not waiting on a lady...say, what the hell is Mick wearing anyway?

Yesterday's post about the Billy Joel video shoot on St. Mark's Place circa 1986 prompted a few people to discuss when the Rolling Stones filmed "Waiting on a Friend" down the block at No. 98.

Yeah, we've all seen the video for "Waiting on a Friend" enough times...

However, we've never seen these photos taken by schillid when the Stones were shooting the video on St. Mark's Place in July 1981. (I found the photos at the It's Only Rock'n Roll Stones fan site.) Here, the boys hang out at the old St. Mark's Bar & Grill on the corner of First Avenue. 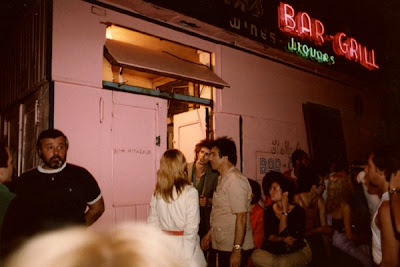 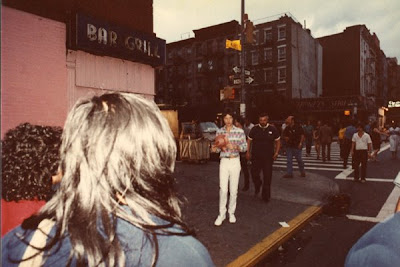 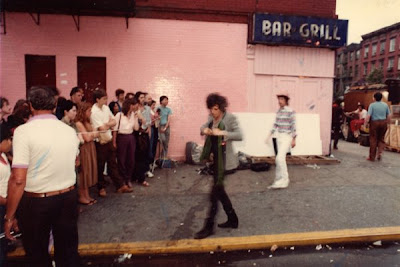 Hung out all day watching this shoot:-)

I move to the neighborhood a few weeks later it's great to see that time and place recorded.

I have loved this vid ever since I moved here. Mick and Keith casually meet up on the "Physical Graffiti" stoop, then stroll over to the bar. Where Woody, and Charlie, and Bill all happen to be hanging out. They share a few laughs, they saunter over to the stage. The Stones, jamming in an East Village dive. People at the bar barely even notice, they are so laid back and blase. An East Village fantasy world of my dreams.

say, what the hell is Mick wearing anyway?

Interesting...I walked by this myself on the way home from the R train on Broadway. I lived across from Tompkins Sq. Park at the time, and always used to walk down St. Marks...there was a big crowd around the front of the bar, and I asked someone what was going on and they told me The Stones were inside. At first I thought maybe they were just smoking something strong, and then sure enough, a few minutes later Keith appeared in the doorway and started hamming it up...

Uh that's 96 St Marks Place not 98 that Mick Jagger is on. 98 has female heads on the cement bars under the windows. But love the shot of the old International Bar. Miss them.