Adam Sandler's 'The Cobbler' comes to the East Village this week 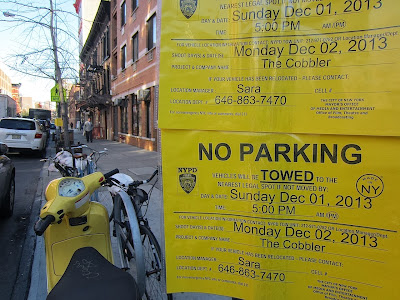 "The Cobbler" has been filming on the Lower East Side in recent weeks (see The Lo-Down, BoweryBoogie and DNAinfo for photos).

And now signs for the production are up on Avenue B between East Third Street and East Fourth Street (and elsewhere) for today ...

And there are more signs on Avenue B, East Seventh Street along the Park and East Eighth Street, Avenue C (and probably elsewhere!) for a Wednesday shoot... 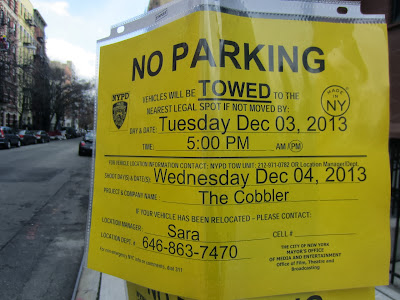 The film, described as a "dramatic comedy," finds Adam Sandler "as a shoe repairman who integrates himself into the lives of the people whose footwear he fixes."

The cast includes Dustin Hoffman and Steve Buscemi; Tom McCarthy directs.
Posted by Grieve at 5:00 AM

These days, a more realistic East Village dramatic comedy would have made Adam Sandler "a celebrity chef who integrates himself into the lives of the people whose paninis he presses."

I was gonna say, "An East Village shoe repairman?" oh the IRONY

Sounds twilight zone like which I like. Hopeful it is and that it is a another punch love drunk performance.