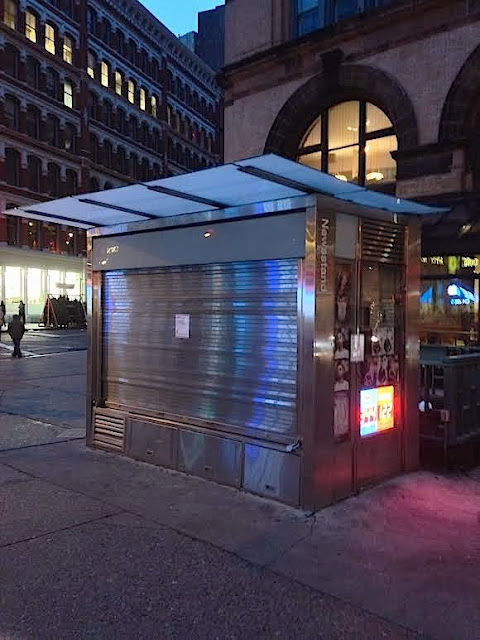 The city continues its assault on Jerry Delakas and the newsstand that he has operated on Astor Place since 1987. The latest: The city shut it down yesterday for "operating illegally." 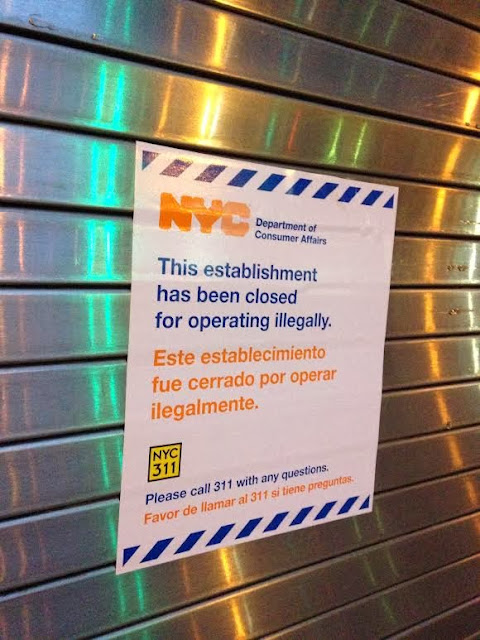 You probably know the back story by now: He has operated the stand here for 25-plus years. However, he's not the legal license holder. He has been subleasing the newsstand from the family who held the license. Per previous published reports, it was the dying wish of the woman who held the license to allow him to operate the stand and designated him as heir.

But that has never sat well with the city, who has spent a lot of money arguing over and over again that Delakas isn't a family member, so he doesn't have succession rights.

I just received bad news ... unfortunately [the Department of Consumer Affairs] decided that in order to have the license Jerry has to pay $37,000 within a month.

Back in February, he was denied his license again by the State courts. They granted him the right to remain at the newsstand until the end of this mayoral administration.

That is now looking less likely.

Update: Ugh. Here's some more on the story.

Previously on EV Grieve:
Expect to see Jerry's Newsstand on Astor Place through Mayor Bloomberg's last term in office
Posted by Grieve at 7:38 AM

The thugs/government want their cut. It's "protection money" - but they don't even do anything to earn it.

It's one of the reasons I moved out of the city.


I personally am pleased about the outcome, because honestly, newstands are really annoying in crowded areas, however that said, I do recognize that this has nothing to do with attempts at improving the quality of life for people and that the nastiness of the city towards small businesses comes from elsewhere. He's lucky he got to do it as long as he did. Just compare any Easy Village nightclub's record of harassment... most last less than 4 years. He was able to exist since 87!

I love this newsstand. Many fond memories of going there for the Village Voice hot off the presses to get a jump on apartment hunting back in the 90s. I wish that he could remain in business, and that newsstands could be individual operators.

how about those outside sidewalk seatings or the Citibike Docking stations? Yeah.

I wish I had 37K; I would give it to him right now. the city is wasting time and money with this! i mean just let the guy work already! ridiculous!

All these newsstands just get in the way of all those really un-annoying things like the hordes of SantaCon drunks and block long CitiBike docking stations and swarming crowds of angry rushing commuters and overflowing garbage cans. If only we got rid of more newsstands we would have more room for the costumed drunks and the ugly corporate sponsored bikes and bigger garbage cans. Then we would never have to read about what's going on in the real world again, we could all just stay in our drunken little CitiBike-riding local-culture-hating biscuit-eating zero-original-thought bubbles, with our ipod headphones turned up full blast listening to rap goth music by Miley Cyrus while waiting for Macauley Culkin to reply to our fan mail. Yes, only when we get rid of more newsstands will the world be a better place.

Guys, they are NOT going to get rid of the newsstand. They are just kicking Jerry out for not paying the full licensing fee that they put in place.

These "fancy" stands generate too much ad revenue for the guys who cut the deal with the city to put them in place.

So they forced the upgrade to the new structure on Jerry, the door sliced off his finger, and now they want $37,000 in back licensing fees from him.

So today's ethics question is: Would you contribute to a fund to keep Jerry in business, knowing that the money is simply a shakedown fee from the thugs in and around City Hall? In essence, it's no different from a ransom from a kidnapper.

Did anyone read how the city got a lawyer to work pro bono for them to evict this guy? This is why lawyers are scum.

I myself find bloviating BJs - er, I mean, DJs - really annoying, no matter where they are located. And since this one seems more concerned with harassment against "Easy" Village nightclubs (those bastions of learning, reasoned discourse, neighborliness and bonhomie) than the fate (at Christmas, no less) of a real, decent, hardworking human being who has been a neighborhood fixture for decades (probably before BJ - damn, there's that typo again - DJ) was even born, that makes him even more annoying than your average run of the mill clueless whippersnapper.

Newsstands are like, oh my god, SO annoying! Like, who READS anymore!? I barely have enough time to play games on my iPhone and text my friends about the cute shoes I just bought. News is for old people.

I don't understand how this happens, who oversees this shit!?

What Giovanni and Gojira said.

Yeah those newsstands get in the way of the iZombies while they check Tinder, play candy corn, and posting selfies on Instagram, making it look like they're that important. How can you be pleased with the outcome when that newsstand will still be there to annoy the shit out of you; it'll just be Cemusa'd. To quote The Smiths: "Hang the DJ, Hang the DJ, Hang the DJ".

Wow, I can't believe that a few people got so very upset about my voiced opinion. Really, is it that offensive that I think that he was very lucky to be able to operate that long? How many businesses can you think of nearby that have been open longer? There's Trash and Vaudville and McSorley's and that's about it. Nothing gets more than a few years these days and I am sorry for mentioning East Village nightclubs, but really they have taken some serious abuse and they add a lot to the community and to quality of life. This newstand is just another newstand and all newstands are pretty bad and unhelpful. I support the idea of removing them. That's a very high traffic area and I've been annoyed with that particular one since the 80s.

BJ (no typo this time), there are stores in Europe that have operated in the same location since the 18th and 19th century; it's called history. The oft-parroted screed that New York is always changing and that therefore we should not, must not, keep anything from the past is simply reductio ad absurdum. And yes, I did find your flippant, arrogant comment offensive - who are YOU to decide when this guy's time is up? And if you really take a moment to read the story, the news stand is not being removed, it's just being given to a giant corporation to run. So getting rid of Jerry is not going to get rid of this INCREDIBLE NUISANCE, as you see it, you'll be walking into it for years.

So the unwritten agreement between Jerry and the license owner was in place, and through numerous mayoral administrations, for decades. Koch, Dinkins, even Giuliani had no problem with it. But good old Evil Emperor Bloomberg - his shit it rattled, and since he is cut from the same miserable cloth as Ben Shaoul (may they both wind up in the same circle of Gehenom), he decided this must be stopped. I'd be curious to know how many millions of our tax dollars he has wasted pursuing this harmless man, just so he can sell the license to Cemusa.

On another note, your assertion that EV nightclubs "add to lot the community and the quality of life" here just proves how much of a dripping bag you really are. I think you're on the wrong blog, my friend.

good lord, what's with the name-calling? I don't agree with some opinions on here,but that doesn't mean they shouldn't be expressed, or that only people I agree with should be reading this blog. ( of course that would leave only me...:D). Hope this guy gets his newsstand back regardless.

Hey BJ, my goth troll nightclub defending friend, when you live in a city with some of the biggest buildings in the world and still think a tiny newsstand is just too big and is somehow getting in your way, may I suggest you do what most normal people do when they find a small obstacle in their path, walk around it. Now please go trolling somewhere else, your multiple unfocussed arguments are weaker than my last Dunkin Donuts coffee.

Really. What else gets in one's way? "Holiday tree stands?" Mud Truck? List is endless. There are plenty of towns between NY and LA where one can live and work in relative peace. Check 'em out, dude.