Claim: The Odessa Cafe and Bar reopens later this week 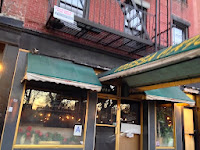 That's the word from multiple tipsters anyway. The Odessa Cafe and Bar at 117 Avenue A closed back on Aug. 31.

In late October, the Cafe and Bar was resurrected in the back of the Odessa next door at 119 Avenue A.

Now comes word that the whole thing will reopen, for at least the next year, in its former location as early as Thursday evening.

Paperwork filed ahead of the July CB3/SLA meeting showed that six people were part of a team who was leasing the space and buying the assets ... at least one of which was a "former owner and general manager" of Tribeca's Tiny's & the Bar Upstairs, according to public documents posted on the CB3 website.

There's no word on whatever happened to that project, though. Meanwhile, the Cafe and Bar space has sat untouched since the Aug. 31 closing. And the "thanks for your patronage" sign on the front window was recently removed.

Reader report: Odessa Cafe and Bar will remain open through Sept. 6
Posted by Grieve at 5:30 AM

If this is true, this is great news! I'm just sorry all the staff have undoubtedly moved on.