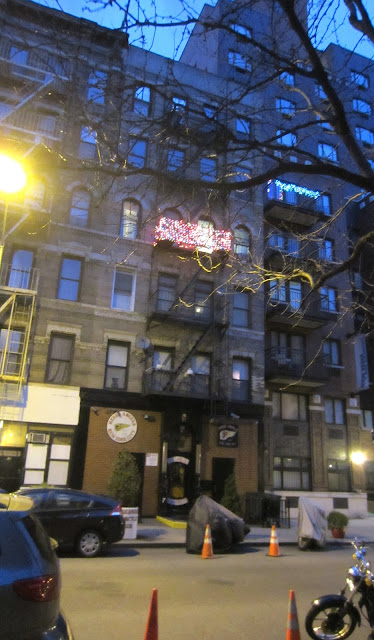 Members of the Hells Angels are reportedly locked in a battle over the rights to their longtime NYC clubhouse on East Third Street, according to the New York Post.

The story dates back to 1983, when then-New York Chapter president Sandy Alexander changed the building's deed to name himself and his family as rent-free tenants. Members of the Hells Angels are now suing Alexander's remaining heirs to prevent them from possibly taking over the building. (Alexander died in 2007.)

A source told The Post that the members have no immediate plans to sell 77 E. 3rd St. — which is on the periphery of New York University's $6 billion expansion plan and in a once-crime ridden neighborhood where one-bedrooms now rent for $3,500 a month — but they wanted to clear up the "cloudy deed."

The decades-old agreement, obtained by the Post, says that Sandy's heirs 'shall receive half of the proceeds" from the sale of the six-story building that has around 10 apartments on the top five floors.

The U.S. government unsuccessfully tried to seize the building starting with a drug bust in 1985. The feds charged that the clubhouse was used to make drug deals. However, a jury ruled against the forfeiture in February 1994, per The New York Times.

The Hells Angels have lived in this building since 1969.
Posted by Grieve at 5:20 AM

Does the building sale include the traffic cones that apparently allow reserved parking and a blind eye by the NYPD?

Yeah, those cones. On public city streets! If only I had the guts to toss them away.

Hells Angels or Bros dressed like Santa, hmmms hard to decide which I prefer.

I'll take the Hell's Angels, 9:46. Last year drunk Santaconners almost plowed me and my pooch over.
Hell's Angel's have never bothered me, EVER.

I'm torn. While I would hate to see NYU take over everything and continue to whitewash the rest of the East Village, I did once get verbally threatened and poop thrown at me (it hit it's mark) by a member of the Hell's Angels at 7am on my way to work. So.

That clubhouse is owned by an entity known as "The Church of the Angels". The east 3rd street chapter of the Hell's Angels is registered as a non profit religion, believe it or not... I am sure that is an aspect of this story too.

I was told, decades ago, that the Hell's Angels' building was originally owned by an old Irish guy, back in the day. Supposedly, according to legend, the Hell's Angels slowly began renting out apartments, little by little, and eventually overwhelmed the building, and strong armed the irish landlord, and seized his building away from him, under dubious circumstances.

These guys are just small-time thugs, amidst their anti-conformist stylings.

To all you newcomers to the LES.. for years when the hood was not safe for Yupsters like you people praised the HA for having the safest block in the "East Village". It was one of the first blocks people like you moved onto exactly for that reason.

i lived next door to the Angels' clubhouse for a couple of years. never had a problem with them personally, but one time a contractor came to look at my plumbing, and i totally forgot to tell him about the Angels' traffic cones. he ended parking in "their" spot and when he came out, his sideview mirror was no longer attached to his vehicle and the side of the van was keyed. it's fairly obnoxious of them but honestly the blame should be laid squarely at the feet of the laziest precinct in manhattan. i mean, if i drove a car, and if i could block off the perfect parking spot and the NYPD consistently turned a blind eye, i'd keep on doing it. not sure i'd do collateral property damage to others but....

I know someone who worked on a renovation of that building around 1986. They dug up 2 guns from under the basement floor. There was a sticker on a door that said "no niggers" which was very uncomfortable because most of the crew was black. Sandy's son was described as "that pudgy little kid." I guess now he will be that rich pudgy little kid once he sells the building and cashes in.

There's a pretty good story at Mrbellersneighborhood.com called '
Good Humor' that mentions the Angels back in the day. Excellent site with tons of good stories!

Does Not Feel "Safe" On That Block, Sorry. said...

@greg6833: Yes, interesting article. The next to last paragraph is telling:

The guy in my face kept yelling, “You want some, you want some,” as the other two kicked the man on the ground. Blood was coming out of his head. Deciding that I didn’t want some, I turned around and started walking home. Half a block away, there was a parked cop car and I ran up to tell the officer sitting in the driver’s seat what I had just seen. The cop, who looked like a kid, told me, “O.K. we’ll check it out as soon as my partner gets back from the corner grocery.” I mumbled in an embarrassed way, since maybe he didn’t understand that they’re kicking this guy right now. Then the cop looked at me funny and said a little louder than before, “I heard you the first time.”

I think that sums up the 9th Precinct's attitude towards the Hell's Angels. They are afraid of them.

The HA's kept their block safe for a very specific type of person. Certain demographics were far from "safe" or protected.

Yeah, but you don't have the guts, so settle for bitching on the internet instead