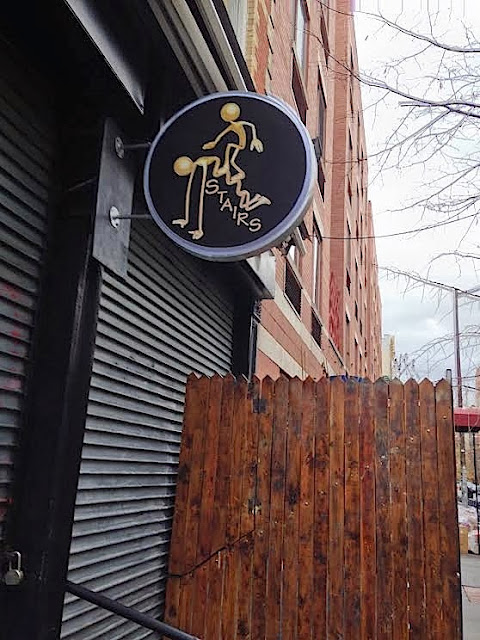 We were a little surprised last weekend to pass by 192 E. Second St. and find the above sign… this space was home the past 18 years to Il Bagatto, which announced its closure in early December. 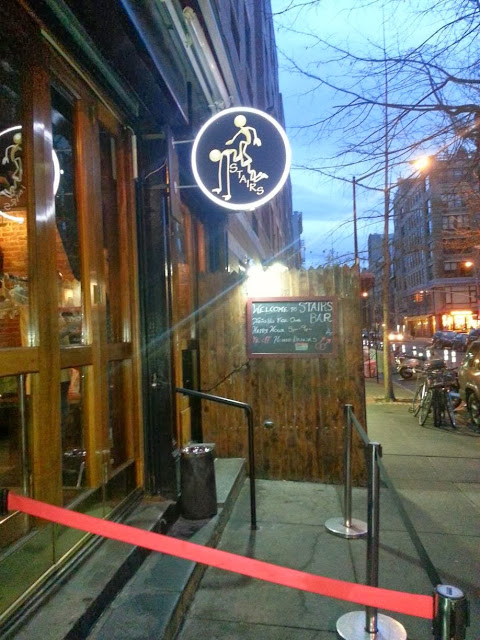 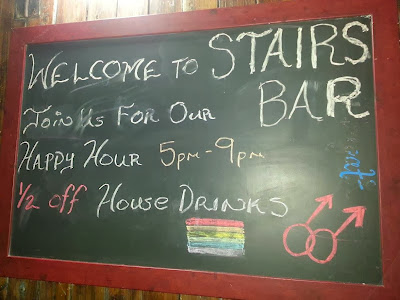 As for Il Bagatto, their menu is still available next door at its sister restaurant, Il Posto Accanto.

[Thanks to EVG Facebook friend Elise Podell for the photos]
Posted by Grieve at 5:20 AM

Worst name / logo for a bar ever.

Oh goodie, a new bar. I've been feeling the lack.

I am incredibly fine with a new bar if it means that it's not a TGIFridays, a bank, or another mega drugstore.

Perspective is a wonderful thing.

What were they thinking with the logo? It's overly complicated, and while child-like, it looks like they're buggering each other.

Not sure how this happened. Love Beatrice but dont see this anywhere on the Community Board calender or voting records for the past year for 192 e 2nd st..

Is this a new license?
Is this a change of method of operation?
is there a a CO or PA on this space?

Thanks we dont need another stealth bar

Wow. Gay meets douchebaggery. That seems a new twist for the neighborhood.

I know this is going to sound wrong, though I don't mean for it to, but my guess is that this place is owned by people who either are not gay, or not from America.

I have no idea what this bar will be like, but long for the days of another "Slide" or even "Starlight". If it's another Urge, then it won't last.

Bar bar bar. More drunks yelling at 3am. Less of a neighborhood and more of a booze zone.

I went in last week to check it out...nice bartender, a bit weird inside....seeing it was pretty much the bartender a go-go boy. Looks like downstairs is the main space (hence the name)

I should start out by saying I am not a fan of loud douchebag bar patrons coming into the neighborhood with total disregard for actual residents who are not keen on 4 am screaming and morning vomit puddles.

That being said, I have to point out to all the "becoming less of a neighborhood, more of a booze zone" crowd that the halcyon days are a figment of your imagination. The commercial venture that occupied the Il Bagatto space previously (and I mean IMMEDIATELY previously) was a shooting gallery. That's right, people from all walks of life would line up outside, wrangled into a line with instructions, "cash only, exact change, no singles" to buy and shoot up heroin inside.

That corner, Second St. and Ave. B, was the largest, busiest heroin-dealing spot in all of lower Manhattan. Before that monstrosity building "The Villager" was there (built with non-union labor, of course) it was the site of the Gas Station/The Junkyard, a performance venue/nightclub. G.G. Allen performed there hours before he died. And remember Save The Robots, the notorious after-hours club around the corner, notorious for the almost nightly O.D.s.

My point is this is not an area that was family-friendly in the "good old days." I would welcome an interesting gay bar back to our neighborhood!

If this new place is still owned by the same person(s) as Il Begato, then they are likely able to carry on with their current license with a new method of operation. However, if more than 80% of ownership is new/changed hands, then they have to go to CB3 and the SLA for a new license. I would suggest checking-in with CB3 about this situation, to alert them to what's going on.

Hi all, I don't know anything about the CB intrigue or the history of the place, but I'm with the "I'd welcome an interesting gay bar back to the neighborhood" poster. We saw it by chance on the way to dinner tonight, stopped by for a glass of wine and had a nice conversation with the bartender. The vaguely homophobic remarks (at least that's how I took them) about the logo and the other remarks about "drunks yelling at 3am" in the comments suggest to me some folks maybe haven't lived near a gay bar before. I hope they do well.

This neighborhood used to have some great gay bars...the only one left now is the Phoenix. The gay bars are what made this neighborhood what it was and they have been falling by the wayside the last 10 years. If you people want less NYU and more culture, this is actually the way to go.

Even if the place is run by the same owners but they are significantly changing their method of operation, in this case from a restaurant to a bar, they must notify and seek approval from the NYS Liquor Authority, and be vetted first by the local Community Board, which advises the SLA to approve or not. In the case of Stairs, none of this has happened yet, according to CB3. They currently may be trying to operate via a "temporary license" since the location had one previously, but they still have to go through the whole process and have not even notified CB3 or the SLA yet, which is violation. This all takes time -- you cannot just sell or change an existing business and then immediately re-open and operate without initiating and going through proper procedures, regardless of the nature and the quality of the business, but it a 4-star restaurant or a sleazy dive-bar/nightclub.

I complained to a friend about searing, soul-crushing loneliness, and my friend told me flatly that I need to start going to gay bars and socializing before I dry up and blow away. In an effort to combat my creeping hermitage, I assembled my few remaining pennies and forced myself tonight to go to a gay bar for the first time in half a decade. I picked a new place that opened recently right on my block a few months ago, largely because I was perplexed by its horrible signage. It's taken me 6 months in the city to work my nerve up for this. I was nervous.

The place was tiny and the only free seat at the end of the bar had a coat on it. I tried to order a drink from the space next to the coat, and some surly mustachioed straight guy interrupted his texting to snap at me to not touch his fucking bag - apparently he had a backpack stuffed in the corner under the bar which I was standing too close to. His overly loud girlfriend returned from doing coke in the bathroom, and proceeded to fondle his butt and shout "sorry baby" at me twice while pushing me away from the bar.

I drank my cocktail in a dark corner - there was nowhere else to stand! - while couples at the bar periodically eyeballed the guy standing by himself. The place seemed to be entirely filled with couples, about 80% of them apparently straight.

The drag queen bartender, whose birthday party I had recently attended, either didn't recognize me or pretended not to know me.

The music was indescribably odious - Beyonce and Carlie Rae Jensen - and my drink was overpriced. I left it on the bar and fled.

I had to remind myself that this neighborhood was once something quite wonderful. And I consoled myself with a few memories.