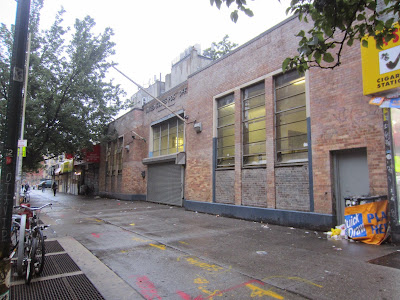 First came the post office's closure … then the asbestos abatement … then the davey drill.

Next: the owners (Benenson Capital Partners) of 438 E. 14th St. filed the demolition permits on Friday.

The post office and former Stuyvesant Stationery shop next door will be coming down for some unspecified new development, which has been rumored now for the past year.

And to recap our recap:

This post office branch just west of Avenue A closed for good in February. (The USPS is leasing the former Duane Reade at 333 E. 14th St. for retail services.) Previously, the Stuyvesant Stationery shop next door to the post office lost its lease and closed. Both single-level buildings share the same landlord.

To date, there's nothing on file with the DOB regarding any new development here.

Meanwhile, it is becoming very clear that I will never see the birthday present from my mother that ended up here in 1992.

To memories of waiting in line… 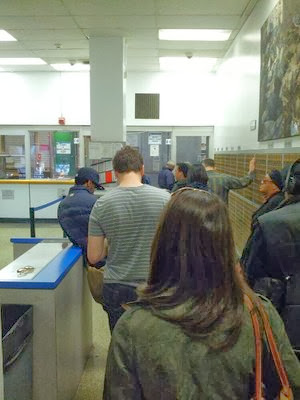 [Just an hour to go! Photo by Adam H. via Yelp] 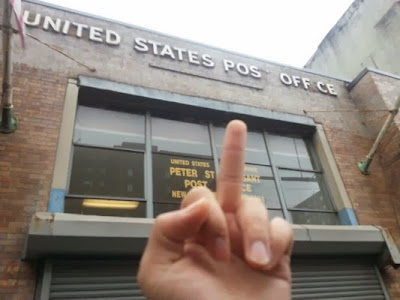 Davey drill arrives ahead of rumored development at former East 14th Street post office
Posted by Grieve at 5:10 AM

If there's one thing that I'm not sad to see go it's the days of waiting on that frickin pick-up line. That SUCKED! However I have to give credit to the staff at the newly relocated facility. So far in my experience I have not had to wait on the pick up line nearly as long as I used to in the old days, so whoever was/is responsible for making that happen, thank you!

If you want to relive the memories of waiting on that effing line, just walk up the street to the new Stuyvesant PO annex, where they hired a guy who is slower than the ten slowest previous Stuy PO employees combined. Please someone say they know who I'm talking about. I go there once a month to mail my fucking rent certified and the guy sends me into "stamp rage" with his cluelessness. At least at the old PO I could avoid the one woman whose dumbness made me rage by letting other people go ahead of me, but there's often only one window open at the new place.

The Tea Party will miss that place, as it only took one visit with waiting on that long, incredibly slow line while the employees took their sweet sweeet time, never giving one bit of hustle or having any concern whatsoever for anything but their next break, to make anyone into an anti-Government activist. Man compare that place to the activity in a FedEx, really 2 different worlds. And the FedEx guys don't make that gubmit money and outlandish benefits either.

Good riddence. Hope the rest of the PostOffice world follows suit, and soon.

Good riddance! My only regret is that they're not doing so with the miserable employees still inside.

I agree with the first commenter. Good experiences at the new post office so far, much better than at the closed location. Fingers crossed that it continues!

@9:08 AM
Regardless of this particular station I appreciate that I can send a letter, card, etc... to California for less than 50 cents. I prefer the postal service remain than having to depend on the private sector to take over something so important. Monopolies will soon form and then prices will be dictated by share holders and corporate asses. Other countries that have sold off public services now regret it big time. The Swedish train system when private and it is a disaster for them. Learn from other's mistakes or be foolish and follow them.

The perfect tribute to the former Peter Stuyvesant Post Office would be to build a bottomless pit into which all letters, packages and hope permanently disappear.

@Giovanni And you'll get on line for that pit.

@ THE NOTORIOUS L.I.B.E.R.A.T.I.O.N. I'm still on line from the last package they lost.

awww. Don't give up on that birthday present! I hope that it finds its way to you some how , some way.

I never had the heart to ask her if she poked air holes in the box...

That program they had there of "losing" your package was a scam so they didn't have to bother to actually locate it. After about the third "lost" package there, following of course the standard hours on line while the clerks drank coffee and joked around with each other safely behind the glass, and then the nasty dismissive moron clerk telling me nope your package is lost buddy, nothing I can do, I went totally out of character and threw a major shit fit there, to the point where they threatened to call the police. Well guess what somehow they miraculously "found" my lost package, I got out of there before the cops showed up if they actually did.

Maybe I'm just jealous, those worthless bums are collecting fat pensions now, full medical and dental, etc., and I am still out here hustling, probably till the bitter end i suppose. Guess I should have taken that post office test, way back when, and traded in my brain and self-respect for a pension and benefits.

God, this place was a grim shithole. Consistently the bleakest space in all the East Village. Glad to never have to step foot in that portal to hell ever again.

Anyhow, the post offices in LA are a lot nicer, the employees are friendlier, and they will actually deliver packages right to your door.

I think whoever used to run the Post Office is now running Laser Ship. Those guys will dump your package almost anywhere they can find in the middle of the night and run away.

Yes Scuba he started as a temp doing a delivery route and wound up sorting mail with a hangover for about 10 years at the Central facility in LosAngeles. Quit when Post Office was published.

The physical structure wasn't the problem with the Stuyvesant Post Office, it was the management of that particular station. And it hasn't gotten much better at their creepy new location.

This never should have happened. Mgmt should have been replaced, not the real PO torn down and sold. But since Republicans in Congress are so hell bent on breaking the PO so that the carrying of mail can be privatized and handed over to their campaign donors, that wasn't gonna happen.

Ken it is the impossibility of changing management, staff, procedures, etc., in a Government operation that makes it so beneficial to privatize these things. If a FedEx or UPS worker had the terrible attitude and super-low productivity of the whole staff at that PO, they would be gone the next time you came back. Not sitting there snoozing and snarling their way thru another day on their way to pensionville, waiting to give you more grief. So the "management" in that place wasn't changing.

That building is an eyesore, I'm happy to see it go. 13th street will look soooo much better.

Pataki made your argument when he deregulated the wholesale electric market in NY back in the 1990s. What we got as a result? Electric bills that doubled overnight. As of 2013, NY now has the second-highest electric price in the US, only trailing island state Hawaii. Dems in the Assembly have been trying to re-regulate the electric market for years, but then there's the GOP controlled State Senate...

Try the same thing for US mail delivery and you're *guaranteed* to get chaos and higher prices: UPS only delivers to locations when and where it can make a profit. Currently, UPS farms out hundreds of millions of packages every year to the USPS for delivery to those unprofitable locations.

The new location across the street claimed to have lost a certified and insured box containing my now-husband's wedding band. I refused to leave the premises until they went back and looked for it. This involved three hours and three employees screaming at me before I got the package. I seriously thought that one of the women--I believe her name was Eve after reading other reports of her behavior online--was going to come out from behind the glass and stab me. The workers there are sociopaths, one and all.

That post office did suck a gigantic weenie but it is still better than the repulsive glass yuppominium that will replace it.