There has been a lot of news coming out of Mount Sinai Beth Israel in recents weeks... first, officials announced that they are closing their 825-bed facility on First Avenue at East 16th Street in the next four years.

Yesterday, the Post reported that Mount Sinai officials have put its First Avenue properties on the market.

As a reminder, hospital reps will be on-hand tonight during a joint Community Board 3 committee meeting to discuss their future plans. The 6:30 p.m. public meeting is in the Thelma Burdick Community Room, 10 Stanton St. at the Bowery.

Meanwhile, we heard from several residents who recently received this letter in the mail from Mount Sinai Beth Israel ... 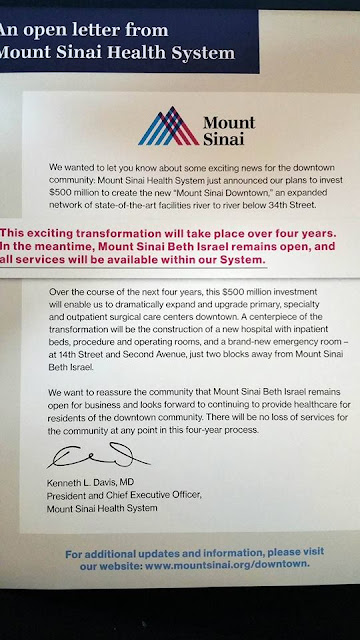 Billed as "some exciting news for the downtown community," the letter outlines Mount Sinai Health System's $500 million investment in their services at various facilities below 34th Street... 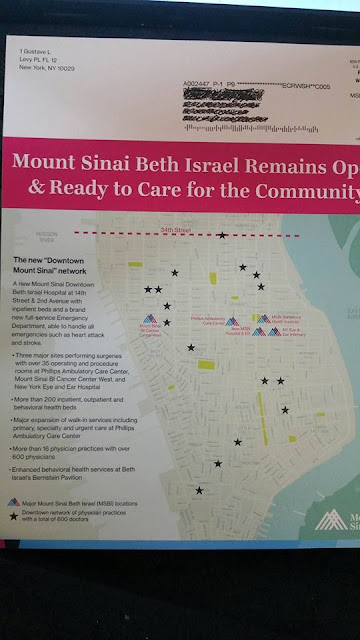 The letter, signed by Kenneth L. Davis, president and CEO of Mount Sinai Health System, does not mention that the current facility will close in the coming years.

NY1 has a report on the meeting here.

Administrators discussed some details of their plan at a community board meeting Thursday night. Saying while the current 825-bed hospital would indeed shut down — it would be replaced by a new, smaller facility nearby.

Still, many question what they see as a drastic reduction in service.

We'll update with other media reports as they are posted...
Posted by Grieve at 4:30 AM

No club! No return of Palladium!

Yup. I got this slick, ridiculous piece of recycling bin fodder...which looks as if it was planned and printed long ago. Nice to know they're wasting money of brainwash like this. Let me tell you, more luxury condos the last thing this neighborhood considers good news. Good thing rich people don't get sick. Hopefully rich people are also delusional enough to think that an ambulance will be able to navigate them uptown in uber-choked traffic in time to save their skins if, by some chance, their mortality begins to show.

Our well being is now something that is in the hands of private corporations who only care about profits and not the needs of the greater population. As always the poor and weak will get the shaft in a one of the worlds wealthiest cities which claims to have no resources for such. After a century of social advancement the gears are in reverse and capitalism of the robber barons has returned. This city must stop human resources from vanishing in favor of a glut of luxury homes and vast fortunes extended further in the real-estate industry. As a society we are judged by how we treat our poor, we have failed.

Some "exciting news," all right; I still don't see any mention of first-aid classes. #thisshitisimportant

Ditto on the ”exciting news” PR spin from hell crap. When you are told something will be “exciting news", you know you are f****d.

Will they be handing out free defibrillators, Bandaids and tourniquets to help you save your own life since they won't have the facilities to help you anymore? Now THAT would be exciting.

Clearly there are too many hospital beds in New York and downsizing the existing footprint of a hospital that isn't at capacity isn't a bad thing... converting the space to an ambulatory outpatient setting makes sense and maybe considering day care options, senior day care, adult day care etc would benefit the overall community

anonymous 8:51am: if there are too mmy hospital beds downtown why is nyu continously building space for more beds?

Remember what Gekko did at Bluestar Airlines -- same thisng what's going on At MSBI.

"Clearly there are too many hospital beds in New York..."
seriously? too many? Ok, Ben, or Ralfy.

Mt. Sanai wants everybody concerned to believe it's a done deal to eliminate opposition. It's not a done deal. It's a sanitizing of their 1st Ave location to up the price of the land. And a denigration of the 2nd Ave corridor. And our politicians will have to sign off on it. And if they do, we should sign off on Mayor B and all the Democratic politicians that are in bed with the real estate industry. My fist is raised in opposition. Power to the people!

Way too many beds! Especially for the poor and sick! What we really need are luxury Condos!

Hey Grieve why don't you want to publish the post I sent this morning about Beth Israel taking over the NY Eye and Ear infirmary and making that the new Beth Israel?

I didn't see any post (or comment?) about Beth Israel taking over the NY Eye and Ear infirmary!

Amazing how no matter what, everything is the fault of the real estate industry. Hospitals are closing? Apparently, it has nothing to do with medicare/medicaid reimbursement or ensuring that health care costs and reimbursements are in a sane place.

Is the milk in your fridge spoiled? Well, that's the real estate industry's fault. Feeling a bit under the weather? Condo developer's fault. Tripped and hurt your knee? That's because NYU put a hex on you. Your sciatica? That's clearly Misrahi realty's doing.

"Is the milk in your fridge spoiled?" Then you will "clean that up" for us, won't you Ben?

Sent it this AM got standard message re you would review. Ok - to repeat - Beth Israel says it will open facility at either 14 or 13 and 2nd. The former Manufacturer's Hanover site is too small.

What would work is the NY Eye and Ear Infirmary - the only question left is will they demolish the original historic building.

THANK YOU FOR ALL THESE FANTASTIC RESPONSES....IT IS HEARTBREAKING!

Any reports from the meeting?

"Clearly there are too many hospital beds in New York" third world nations have a better population to hospital bed ratio than this.

All thoseremendous institutions that were set up my immigrants to help us are evaporating in the march of a new class of millennials -- both developers and buyers -- who are creating a new paradigm. As one speaker noted, BI has been around for 130 years; only to be gobbled up three years ago by a conglomerate, and then downsized when the market was ripe.

A question was asked how reduced the staff would be at the 14 Street and 2nd Avenue "hospital" -- and the two gray suits who were the point persons (they looked so very Westchester) for BI would not give numbers. Nor would they agree to increasing beds after numerous requests from CB members and community residents that the 75 figure was woefully unrealistic. ("If the demand is there," they chimed in gleefully, "we'll build three additional floors to the building!") Which means those waits for beds would take at least a year -- and would be comically had not this been said with such sincerity. "Mom, I'm out in the hall, but don't worry BI promised we they are building three floors with more beds, so I'll be admitted soon."

Their ER they claim will do all the work of an emergency room will not. It will be only an operating room. If you call 911 and they take you there by mistake, because it is the closest ER, you'll not be admitted.

Oh, and there is no maternity ward or beds. So if you are in labor and need a hospital nearby, you are out of luck.

And, of course, as expected, De Blasio was nowhere in sight -- at least he could have sent a representative! But, yes, let's hope this is the end for that hypocrite.

I was at the meeting last night and left with more concerns than when I went there (my starting point being that hospitals everywhere are closing/shrinking due to changes in health care and insurance reimbursements, so this restructuring isn't shocking and may be needed). The hospital's two representatives "Brad and Brad," were classic mealy-mouth flak-catchers whose answer to most questions not covered in their printed presentation was "we haven't finished all the planning yet so can't answer that." A few tidbits I haven't seen covered elsewhere:
-- no obstetrics at the new hospital, expectant mothers will have to go to another facility (West Side, Uptown or Brooklyn).
-- no plan to replace the current hospice beds ("we haven't finished planning" but there is no plan for them in the current materials).
-- new ER entrance will not be on 13th Street -- "we understand the nature of 13th Street" -- but will instead be at 14th and Second.
-- without actually saying the press reports were false, they kinda sorta denied that the First Avenue hospital site was being put on the market. Why not a yes/no answer? unclear.
-- they said Eye and Ear (already part of their system) would stay Eye and Ear.
There were some excellent questions from a member of the audience who is a nurse in another hospital about the type of hospital beds and what that meant for the type of services that would really be provided. I think we in the community need to know more about health care delivery to be able to respond adequately to Mt. Sinai's plans.

This is the New Mt. Sanai... The Hell-With-You Hospital. They are sanitizing 1st Ave to up the price of their land at the expense of medical services they are under contract to provide to the city. Where is Di Blasio? Where is Maloney? Where is Mendez... All bought off, I'd expect.

Ha ha at who's expense?