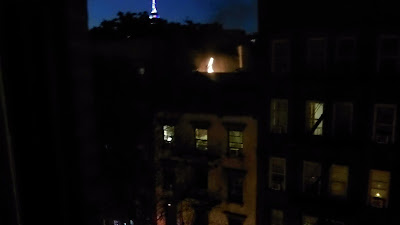 [Photo from around 8:20 last night by Charles]

EVG reader Charles shares this from last night — a report of a fire at 519 E. 12th St. between Avenue A and Avenue B.

Shortly after 8, Charles looked out his window to see "flames shooting up the rooftop of the three-story apartment building at 519. I called 911 immediately. Thankfully, at least one other witness had also called in a report prior to me because no sooner had I hung up when three firetrucks roared onto the block."

The fire was very quickly extinguished with minimal damage to the top-floor apartment.

According to what I gleaned from eyewitnesses, the fire had been going on for several minutes. One resident of the building behind 519 said that he had smelled smoke at least 20 minutes before looking out and seeing flames that were as high as 15 feet and climbing the side of the adjacent building at 517. He called 911 at 8:07. The fire marshal at the scene couldn't ascertain the fire's cause but he did note the presence of candles atop a picnic table on the rooftop.

We were very lucky the fire was spotted early and quickly put out. But as we head toward the 4th and the prospect of several weeks of summertime gatherings, I hope all East Village residents will exercise proper caution and vigilance.

The assholes in the building next door come on to the roof of my building and party - like bar-b-que time. I caught them once. And the super took the grill. Not to be detered, they tried again and the super took the grill. Happy to report there was no 3rd time - the landlord threw them out. All arrogant. All stupid. All spoiled. What a generation.

Right after this fire the fire department reported to the corner of 12th and A because of a suspected gas leak. They were going into nearby buildings to test for gas leaks.

I doubt the tenants who were hanging out on that roof were doing so with the building owner's blessings. Breaking rules can have deadly consequences. Thanks for those that called 911 and shout out to the FDNY.

Oh please 8:51pm. How else could this fire have started? Not a rhetorical question - tell me.