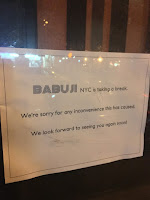 News broke back in March about a second wage-theft and overtime lawsuit against Babu Ji owners Jessi and Jennifer Singh. Around that same time, their popular Indian restaurant on Avenue B at 11th Street went dark ... and never reopened in this location.

Settlement papers filed to public record earlier this week show that each of the three former employees will receive under $28,500 as part of the agreement, while attorney (and notorious restaurant thorn) Maimon Kirschenbaum’s firm will receive more than $44,000. The Singhs did not admit to wrongdoing as part of the deal.

The former Babu Ji space on B and 11th will be an Indian restaurant from the founder of Curry in a Hurry, Akbar Dawat and Café Spice, among others.

With court date looming, Babu Ji 'is taking a break' on Avenue B
Posted by Grieve at 1:30 PM

I thought once they shutdown that it would be a long slog to see any money. I'm glad to see the workers are getting paid.

Yeah ok whatever helps you sleep at night. Everyone knows you fucked up big league.