A wake for the last willow trees at La Plaza Cultural 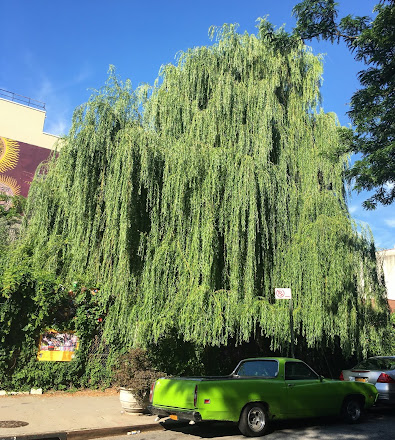 The last two willow trees in La Plaza Cultural on the southwest corner of Avenue C and Ninth Street will have to be removed.

A recent inspection by Manhattan Forestry confirmed what some members of the community garden had feared: the trees are rotting.

The willow (nicknamed Cher) in the corner of La Plaza by Avenue C looks especially bad ... 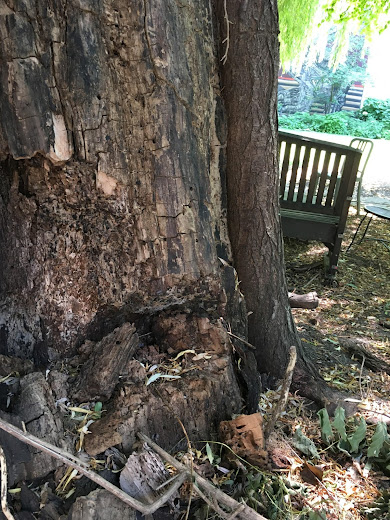 The other willow (aka Krusty) is located near the garden's gazebo. 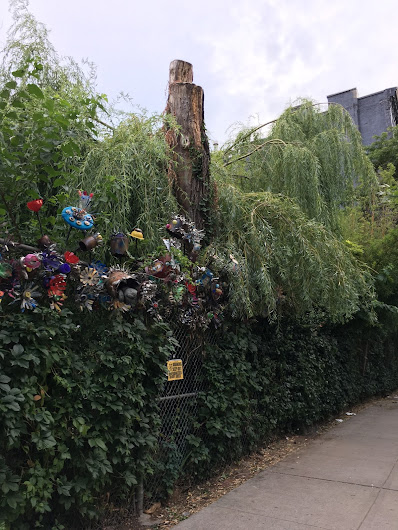 Here's part of a missive that La Plaza shared:

Our weeping willow trees are around 41 years old. They were first planted in La Plaza thanks to a grant from Plant-A-Lot, and there were originally three willows and three linden trees all planted at the same time. One willow and one linen were toppled by Hurricane Irene. And another linden had to come down after Hurricane Sandy. And recently the Parks Department has determined that the willows are rotting from the inside and are in danger of falling. One even has visible fungus. The Parks Department has made a descion that they must come down and will take them down when they have the time. La Plaza Community Garden is saddened by the loss of our great willow trees and is reaching out to the community seeking people's opinion as to where we should go from here.

On Sunday afternoon, Rev. Billy and members of his choir will lead a weeping willow wake... 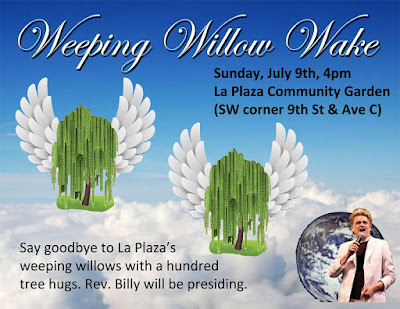 Per La Plaza executive director Ross Martin: "We have no idea when the city will come to perform this unthinkable yet necessary act, but it will be soon, so please join us one last time in the green shade." 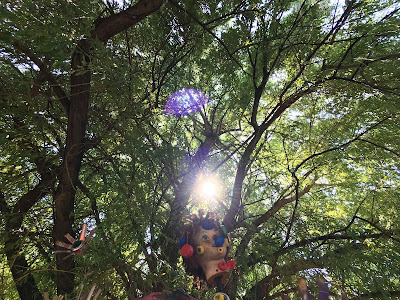 [Underneath the green shade of Cher the willow tree]

Tree muggers at the La Plaza Cultural
Posted by Grieve at 4:30 AM

And the ceaseless drumbeat of loss continues. Thank you, lovely trees, for the beauty and splendor you provided to us for so many years. You and your graceful, sheltering branches will be missed.

I thought I had seen everything. Are you kidding me? A wake for trees? A pastor? Give us a fucking break please. It's sad they can longer remain, but this is a bit much, isn't?

The community should take up a collection to buy Willow saplings and plant them so that future residents of the EV can enjoy them the way we all did.

I think it is a beautiful thing to have a wake for this tree. It's a loss and we would benefit from valuing nature the way Native Americans always have.

As a resident of LES for over 35 years I have had the pleasure of watching them grow.
Willows are notorious for living for many years and finishing themselves by nature or time. They do not live really long lives like redwoods or oaks..
Its best to think of this has a good change. See if the massive trunk can be saved for sculpture, mushroom gardens or furniture. It is sad to see a friend leave, but natural. The good news is one can plant new ones. With love and care (and hopefully no hurricanes) they too will live there for 40 + years as well.
Rose

10:35 AM: That's true, anonymous, the trees can't hear us. And when a loved one dies, they can't hear us, but we speak to them in memory. And your words on this website, when you think about it, are nothing more than electrons, floating in the air, and yet they affect us...

as Rose McShane said, trees do have a lifetime. some are so long lived that we think of them as 'having been there forever'.

Trees are awesome. They make life in the city happier.

i am sad to see these beautiful trees go and think a wake is a wonderful idea! also i would gladly contribute to the sapling fund if one is set up!

Oh, what a shame. These were such beautiful trees and provided much-needed shade on hot summer days. So sad to see them go - I hope new ones can be planted.

It's pretty nice to see people still have a lot of respect for these trees and just nature in general. It breaks my heart everytime construction workers chop off trees blocking their sites. Tree lines are definitely disappearing in this neighborhood.

I love the sapling idea...but what will provide the shade in the meantime?

A wake for trees? Yeah, that's a little much. Better to start a fund for money to plant new trees.

what happened to this garden? it was kinda awesome for a couple years there and now it is kinda run down and crappy again?

This Intersection was once a Beautiful Unique Weeping Willow Enclave swaying In the Wind .One by One they have gradually been removed with no replacements.Zero! I guess the Memories are not that Fond ?

How about both? Why knock community members getting together?

The city has a tendency to cut but not replace. Why? Maybe they do it as a favor for certain real estate owners. I noticed a lot of trees cut down around NYU buildings that are neverever replaced - like 5 years and counting never replaced!

Willow trees have a comparatively short life span when compared to other trees. I love to see ritual created around losing loved ones and plant people are definitely a part of our lives to be loved and remembered. Rev Billy is always up to beautiful trouble.
Salix (willow) is the easiest plant to re-root? If you take cuttings and stick them in the ground they will grow. In fact, you can have the bark and make rooting hormone for starting other plants. One possible thing to do with this tree before it is cut down is to start many willow saplings in pots and sell them as a fundraiser, give them to neighbors or plant them all over the city. These will live on in memory of the parent plant. Also, mulching the tree and using it in the garden is a great way to honor the fact that a living tree growing strong above ground only represents half of a tree's life, the other half happens when it falls on the forest floor and becomes food for fungi, bacteria, and invertebrates to continue the forest ecology. If the stump is not completely removed, another willow tree will grow in its place, Willows are fast growers and will start providing shade in just a few years.

Krusty? Awwww shoulda called it Sonny for Sonny and Cher :)

To those who think a wake is "too much" or who need "A fucking break" attendance at the wake is not mandatory. You know that, right? Feel free to stay home or to hang out at the 7-11 or at Starbucks. Our nabe is well know for our attachment to our parks, gardens and trees. A wake we will have. All love...

Maybe because people like you complain without helping out?

That paint job don't make that rust go away on that Ford 1970 El Ranchero in the first photo. :-)

I went to the wake, which was a positive event. Thanks to all the neighbors who came out - this was a real community event that served to remind me this is still a great neighborhood thanks to the tree-lovers in it.

As much as I love this tree, it's obvious it is at the end of its life. But that doesn't mean life is over! New trees can be planted and even this one can live on through its sproutlings.