A free buffet for voters at 99 Favor Taste on St. Mark's Place 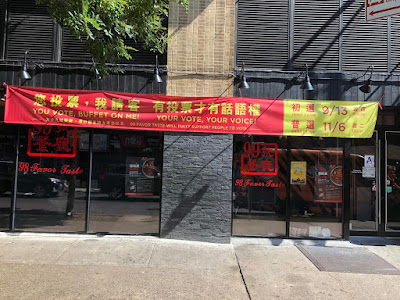 The owners of 99 Favor Taste at 37 St. Mark's Place at Second Avenue want you to vote.

As the banner above the entryway declares: "You vote, buffet on me!" The deal is good during the primary election on Sept. 13 as well as the general election on Nov. 6.

Aside from a free meal for voting, 99 Favor Taste also comps your meal on your birthday.
Posted by Grieve at 4:00 AM

Is it good only on that Election Day it could be redeemed during that voting period?

Quite a bold move in the name of civic duty! I had my doubts about this place but I am very impressed that they care this much about voter turnout.

With that 'birthday comp', there is a minimum of four, meaning the one free meal does not lost them that much money.

To @ 1:35
Actually, their info reads: On your birthday, a free meal, no minimum diners. Up to 3 days before or 3 days after actual birthday, must have 4 diners for 1 comped meal.