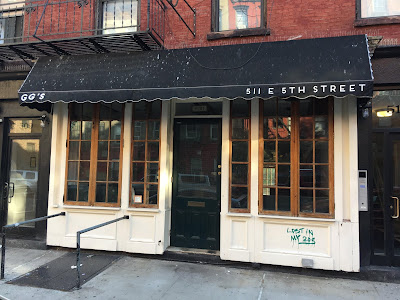 Matt and Emily Hyland, who run Emily and Emmy Squared, have announced their intentions for the former GG's space on Fifth Street between Avenue A and Avenue B.

In a fall preview at New York magazine, the Hylands say they'll be bringing the under-represented grilled ­pizza to the address.

Hyland plans to cook his pizzas over a hybrid gas-and-charcoal grill. The key, he says, is achieving a crust that’s crisp, but not cracker-crisp, and also soft. He’ll use a nifty combo of Fontina, Pecorino, and a fancy, eminently meltable Jasper Hill Farm shredded-cheese blend on some of the pies. And that’s not all. More so than at their other restaurants, the kitchen will delve into non-pizza dishes including housemade pastas like spaghetti chitarra with clams and bonito butter; grilled whole fish and head-on shrimp; and johnnycakes treated like polenta and topped with, say, roasted mushrooms and bitter greens.

Emmy Squared was originally thought to be taking over GG's. However, that space has been dormant since GG's closed on Dec. 23.

Emmy Squared, with its Detroit-style pizza and double burgers, opened on First Avenue at Fifth Street in July.

The still-unnamed grilled pizzeria is expected to open in November, per New York.
Posted by Grieve at 4:30 AM