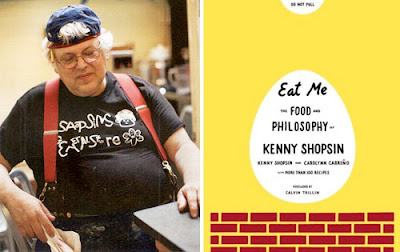 Kenny Shopsin, described as the "legendary (and legendarily eccentric, ill-tempered, and lovable" chef who owned Shopsin's in the Essex Street Market, died on Sunday. (Jason Kottke was first to report on Shopsin's passing. Updated: Here are tributes via Grub Street and Eater.)

According to the Times, Shopsin was 76. The Times noted that Shopsin had a variety of health issues in recent years.

Before relocating to Essex Street in 2007, Shopsin’s General Store anchored the corner of Bedford and Morton streets starting in 1971.

Per a feature by Calvin Trillin in The New Yorker from 2002:

Normally, mentions of Shopsin's in print are complimentary, in a sort of left-handed way — as in Time Out New York's most recent guide to the city's restaurants, which raved about the soups and described Kenny ("the foul-mouthed middle-aged chef and owner") as "a culinary genius, if for no other reason than he figured out how to fit all his ingredients into such a tiny restaurant." To Kenny's way of thinking, a complimentary mention is worse than a knock. It brings review-trotters — the sort of people who go to a restaurant because somebody told them to. Kenny finds that review-trotters are often "petulant and demanding." Failing to understand that they are not in a completely conventional restaurant, they may be taken aback at having the person next to them contribute a sentence or two to their conversation or at hearing Kenny make a general remark in language not customarily heard in company unless the company is in a locker room or at being faced with deciding among nine hundred items and then, if they have selected certain dishes, having to indicate the degree of spiciness on a scale of one to ten.

Kenny Shopsin, raconteur and chef, died today. Someone who made New York City an amazing funky place, a spark of personal humanity in the big city. He will be missed.


Kenny Shopsin died this morning. I can’t explain how important his restaurant was to me and my idea of what New York is. He was one of the kindest people I ever met and I never saw that more clearly than when he was throwing someone out for not following the rules.


In memory of Kenny Shopsin, the Calvin Trillin piece on him and his old restaurant on Carmine. I remember when I first met him, he had a flip phone hanging around his neck on a piece of twine, in case his wife had to call and yell at him. https://t.co/VFgCGQeVUv


Sad to hear that Kenny Shopsin has died. Can’t think of anything uncliched to say about his cooking, his candor or what he symbolized when it comes to NYC. In his honor, I vow to spend more time spouting impassioned expletives in mixed company then unapologetically dozing off.💔


Kenny Shopsin has died. The man knew how to make a menu pic.twitter.com/9KASA772Dq


There's nothing I can say about Kenny Shopsin's passing that he wouldn't find insufferable, except: this city is a boring shithole made for tourists, and your kid is beautiful.


Horrible horrible news today: NYC’s impossibly great Kenny Shopsin has left the planet. For those who don’t know Shopsins, his daughter Tamara made a great book in 2017 about the restaurant and the world Kenny embodied: https://t.co/c8ar5F2x19


I loved Kenny Shopsin. He/Eve fed me for free when I was broke. Like everyone, our friendship was based on profane barbs flung back & forth at each other. The magic of Bedford St has so many memories. I’ve more to say, but for now- #AllOurCooksWearCondoms #RIPkennyShopsin #EatMe


As Brooklyn Vegan pointed out, the 2004 documentary on Shopsin's, titled "I Like Killing Flies," is not available on any streaming services and the DVD is out of print.

There are, however, assorted clips from it on YouTube...

I never met this man but I have met several men like him, true philosophers but without the "filler".

I echo @noble neolani's comment above. I can't believe that I lived in Stuyvesant Town for 60 years and never heard about Shopsin's. I guess it points out the unbelievable diversity of the city. RIP Kenny, it sounds like you were a real pisser, so sorry I didn't know you.

Gonna spend the next few days reflecting on my not-so-terrificness. RIP Kenny.

RIP Chef
I will rewatch "I Like Killing Flies", in your honor.