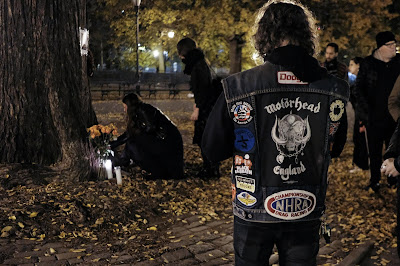 Tonight, friends and family came together — in Tompkins Square Park and at Niagara — to remember Todd “Youth” Schofield.

The NY hardcore guitarist, who lent his talents to bands including Agnostic Front, Warzone, Murphy’s Law, D Generation and Danzig, among others, died on Oct. 27. He was 47. (A cause of death has not been reported.)

Earlier this evening, his loved ones placed flowers and candles at the Hare Krishna Tree in Tompkins Square Park.

His children, Abijah and Eliana, who launched a crowdfunding campaign titled The Youth Fund, wrote that "our dad became interested in Krishna Consciousness as a teen in the mid 80s."
Posted by Grieve at 10:01 PM