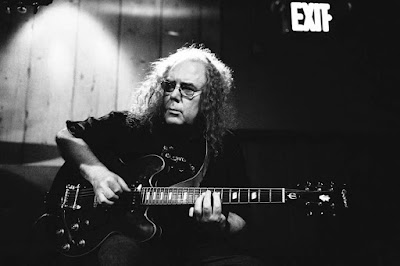 Jimi Zhivago, a musician, producer and composer who lived in the East Village since the early 1980s, died on Nov. 8 after a short illness*. He was 67.

Born James Daley on Aug. 1, 1951, in Brooklyn, Zhivago "had been a musical legend and force around NYC and beyond," his friend and collaborator Chris Riffle said.

Zhivago moved to Chelsea in the mid-1970s and later to the East Village where he lived on Fifth Street since 1982. He was a regular on many scenes, including at Max’s Kansas City where he performed with Klaus Nomi and Wayne County, then later at Sin-é on St. Mark's Place.

He had many varied credits to his name. He played with Rufus and Martha Wainwright, and Glen Hansard, among many others. He had a major label solo record released in the late 1970s and was a founding member of Ollabelle. Zhivago played electric sitar on the Neptunes' remix of "Sympathy for the Devil" in 2015 and produced the SiriusXM show "Live at the Living Room" for 10 years, broadcasting performers like Norah Jones, Jason Isbell and Madeleine Peyroux.

"He was an integral part of so many careers," said Riffle, a singer-songwriter who recently toured with Zhivago. "From producing albums to playing live, Jimi was a huge part of the East Village and will be sorely missed by many."

There will be a musical remembrance and celebration of his life on Dec. 3 at Drom, 85 Avenue A, from 6 p.m. to midnight.

* Updated
Zhivago died from liver failure from a reaction to a drug taken for prostate cancer.
Posted by Grieve at 4:30 AM


Just so crushed and moved by the loss of Jimi after
a long friendship and history in the chelsea 70s days and 80s.
My Father's Place, Planet Sound mixings, Laser Physics in the meat district,
installing gates on the windows in lower east side apt.,
all the late nights at local venues, then Paris, Berlin,
and the story goes on.

Happy to have kept in touch with him over the years
but, due to myself, not on my 2018 passage in town
(moral: leave nothing till tomorrow).

I am very saddened as is his family and colleagues.

As all his closest may see it as special piece of life now abstracted
under the title of 'past' but still very much alive due to his
work, convictions towards the art of music and writing, including his friendships
in his special way, all ethereal and sincere.

Love to you all. He is always with us.

In my time, knowing and touring with him, Jimi was a joyful and inspiring force, giving the music and atmosphere a unique resonance. Of all the great times, I can recall riding a London cab to a show and Jimi playfully, relentlessly asking the cabbie, ‘is this Abbey Road?...did the Beatles play here? (while passing a small public park) or ‘ did Ringo live here?(while driving near Piccadilly Circus....) His playing style was unmistakable and I miss him greatly. Until we meet again, my friend.