Vacant lot at 14 2nd Ave. sells for $7 million; will yield to 10-floor condoplex 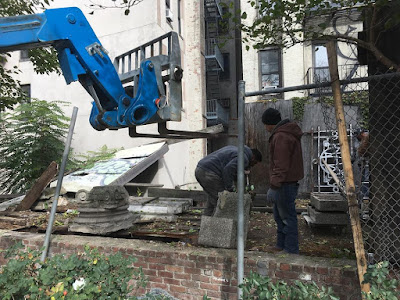 That empty parcel at 14 Second Ave. between First Street and Houston has a new owner who plans on building condos on this spot adjacent to First Street Green Art Park.

According to a real-estate transaction posted yesterday, Evan Blum, who owned the previous business on the property, Irreplaceable Artifacts, sold the parcel to developer Daniel Vislocky of Station Companies for $7 million.

The site offers 15,042 buildable square feet as of right. In a news release on the sale, Vislocky said his firm plans to build a 10-story residential building with full-floor luxury condominium units on the property.

To date, there's nothing yet on file with the Department of Buildings for the address. (And there are still Stop Work Orders dating to 2009 and 2000.)

In July 2000, the city demolished the four-story building that housed Irreplaceable Artifacts at 14 Second Ave. According to the Times, a wall and two floors collapsed at No. 14, which forced the evacuation of 51 apartments in three nearby buildings.

The Times reported that a construction crew was making alterations to the first floor of Irreplaceable Artifacts in defiance of a stop-work order.

On Oct. 26, an EVG reader spotted workers at 14 Second Ave. removing several artifacts that remained on the site following the building's demolition

As the reader noted then: "Can luxury condos be far behind?"

Gross, he should not benefit