What lies beneath 9th Street and 3rd Avenue? 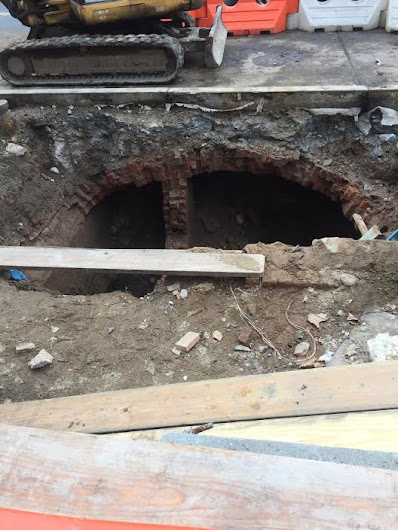 An EVG reader shared these photos of some type of underground brick vaults that a construction crew unearthed earlier today while doing road work... taken on the northeast corner of Ninth Street and Third Avenue.

Per the reader: "Would imagine they have something to do with structures originally along Stuyvesant Street, which means they could be very old. Not an expert on dating cellar construction." 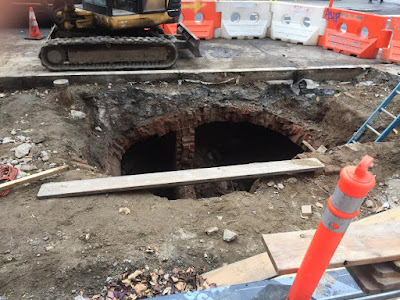 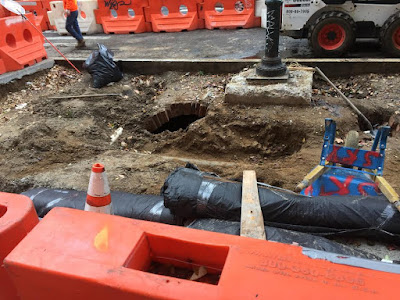 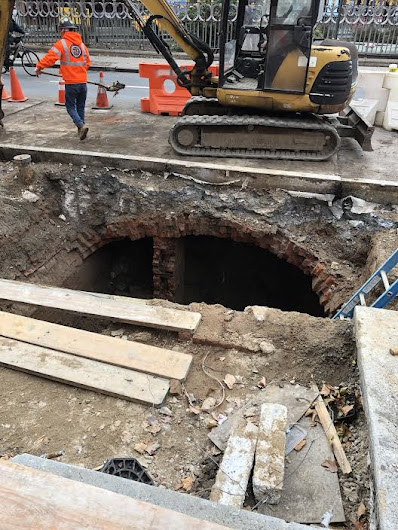 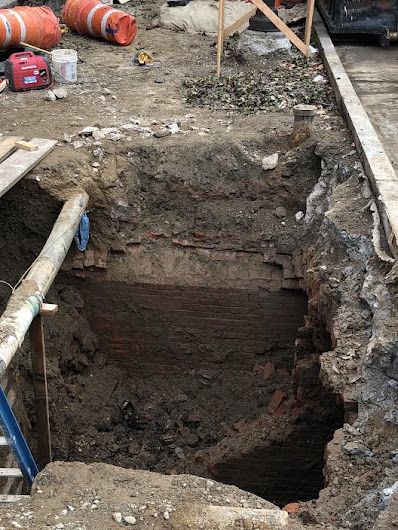 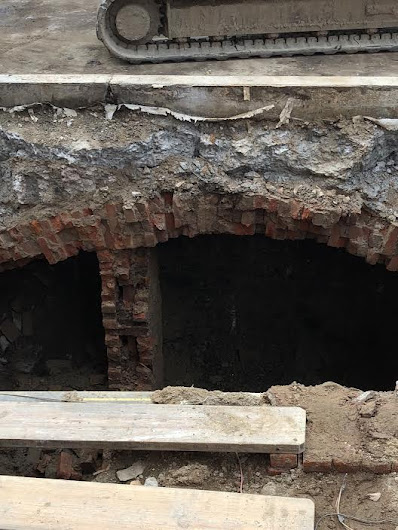 Perhaps we can find out what this was part of... maybe something to do with the elevated train that ran north-south along Third Avenue ... or the trolley system near here.

Anyway! Here are some photos of the area via the NYPL Digital Collections ... this is described as "Third Avenue, looking North from the 9th Street station of the Third Avenue L" from October 1927... 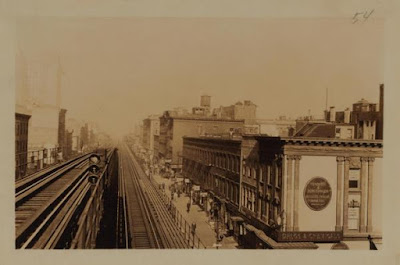 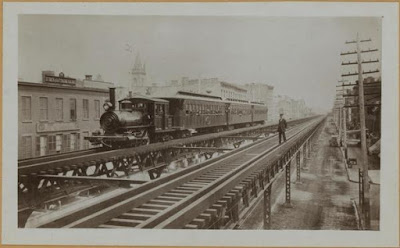 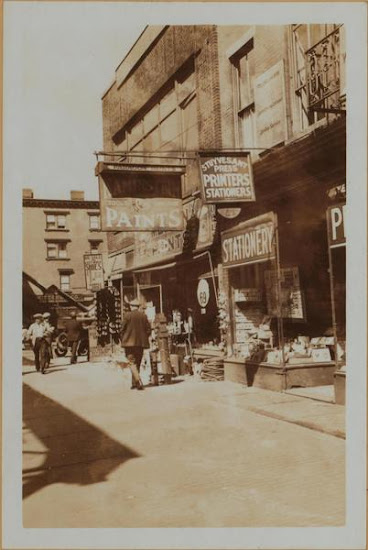 Updated 11/20
See the comments for more possible explanations of what these bricks might be part of... ———>

Email ThisBlogThis!Share to TwitterShare to FacebookShare to Pinterest
Labels: mysteries, what lies beneath

Wasn't this area once part of the original Stuyvesant family farm/estate? In which case it could indeed be very, very old. If it were associated with trolleys or trains, the construction material of choice would be steel.

According to https://www.6sqft.com/peter-stuyvesants-nyc-from-the-bouwerie-farm-to-that-famous-pear-tree/ , these vaults could be New-Amsterdam-old! This area was certainly part of the original Petrus Stuyvesant farm/estate that he called the Bouwerij (or the Bouwerie), that he established while he was the Dutch Director-General of the colony of New Netherland from 1647 to 1664. The boundaries of the 64-acre property were East 23rd St. to the north, East 6th St. to the south, 4th Avenue to the west, and Avenue C to the east.

Super-exciting! I hope they do not just fill it in without further excavation!

Omg! That last photo is of an early Kamenstein’s! Take a closer look at the sign! When I moved here in ‘69 that spot was the best hardware and housewares store that ever was.

looks like the over 100-year-old brick vaulted ceiling in our building's basement.

There were vaults underneath the sidewalks to store coal. maybe that is what this is.

I'd bet my bottom dollar that the last photo was shot by Percy Loomis Sperr.

I'd bet a whole lot less than that on the vaulted structure being Benjamin Winthrop's wine cellar...

Part of the farm... More likely it's got something to do with the streams and such below the city, like the Minetta

Drumpf just twittered that this is part of the foundation for The Wall Around NYC (30 years too late and, of course, misplaced)

@Patricia Kennealy Morrison Ooooo, I want to change my guess to "Hellmouth"!

Not deep enough to be from the original farm, I don't think. The coal vaults seems like the most likely explanation.

Also where the folks from the latter of the Bridge and Tunnel crowd are coming from when invading EV esp. on the weekends.

Perhaps they are related to the underground burial chambers of St. Mark's Church?

Hope an archaeologist takes a look to see if something of historic value is contained within the stuctures.
BTW, Kaminstein's was a great hardware store. It had so many useful things.

Does anyone know the name of that little triangle park adjacent to the excavation (shown in the 4th picture... 3rd Ave/9th St/Stuyvesant St)? It's not the Abe Lebewohl Triangle down the block. It has a sun dial in the center. I just can't find any info about it.