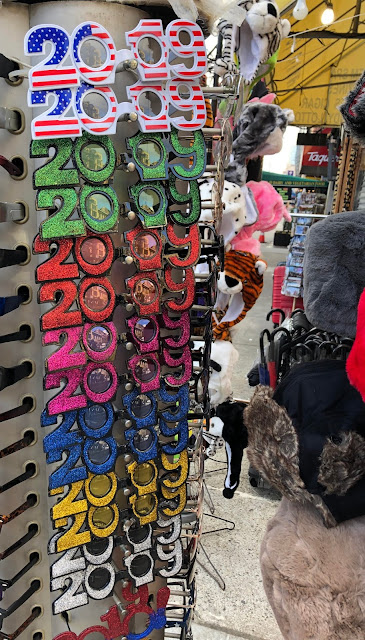 Happy 2009 everybody! Welcome back to the days when you could still go get drunk at Mars Bar, have a Soy Burger dinner at Dojos, pick up cookies at De Robertis Paticceria, go to the emergency room at St Vincent’s Hospital, order a large cone of frites topped with Parmesan peppercorn sauce and free jalapeños at Pomme Frites, shop for vintage threads at Atomic Passion, eat Italian an Carmine’s at the Seaport, see an Indy movie at The Sunshine on Houston St. grab a donut at Sugar, do brunch at The Noho Star, see La Boheme at The Amato Opera, eat ravioli at Rooco on Thompson St,, have chow mein at Jade East, see a drag show at Lucky Cheng’s, have a cheesy slice of pizza at Original Ray’s Pizza, buy gasoline at a gas station, browse for hours at St. Marks Bookshop, gawk at tourusts shopping for overpriced luxury goods at all the boutiques and four (4!) Ralph Lauren shops on west Bleecker street (now all thankfully closed), get a cheap haircut at Atlas Barber School, buy vinyl records at Bleecker Bob’s, pick up a loaf of onion rye at 9th St bakery, bite into an authentic H&H Bagel, eat veggie chili at Life Cafe, not worry about all the bikes zooming by in the bike lanes, do happy hour at Telephone Bar & Grill, check out the lobby art at the Chelsea Hotel, order samosas at Mitali, recover from clubbing at Empire Diner, crash a wedding reception at Tavern on the Green, get a “Homeless Hotfdog” (just the bun with all the toppings) at Grays Papaya on 8th St., discover impossible to find books at the Barnes & Noble flagship store on 17th St, get a late night felafel at Bereket, pick up frozen margaritas to go in a paper cup at The Hat on Ludlow, roll a strike at Bowlmor lanes, rent a rare Korean horror movie on VHS at Kims Video, hang out in the backyard garden at Yaffa Cafe, watch movies on one of the biggest screens in the city at The Ziegfeld, grab a home cooked meal at The Stage while reading The Village Voice, eat a holiday meal at Lanza’s, do brunch at Cafe Orlin... It’s so nice to be back in 2009 again.

@Giovanni - thank you for the brief but happy trip down memory lane. At least we still have Gem Spa. Sigh.

They fucked up by accenting the 1, should have just made a fat l.

Hard to believe that it was that normal and genuinely vibrant in 2009 year 8 of Fun Size Mayor Bloomberg and 11 months away on the eve of his illegal third term in office.

I will be celebrating 2009 in protest.

So pathetic. The era for "200X" themed novelty glasses has ended, it ended exactly at 12:00AM on January 1, 2010. It was fun while it lasted and yes it is a big bummer that we won't again be able to put lenses in place of the two zeros until the year 2999, but come on, let it go already!