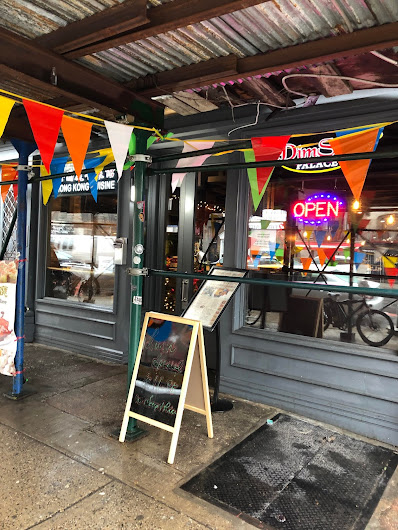 Dim Sum Palace is now up and running under the sidewalk bridge in one of the storefront spaces at 59 Second Ave. between Third Street and Fourth Street.

We first spotted the signage for the restaurant back in March. As noted then, the owners also run two locations of Dim Sum Palace in Midtown.

You can find their fairly extensive menu here. Their hours are 11 a.m. to midnight daily.

CB3 OK'd a beer-wine license for them this month.

The incoming Dim Sum Palace has a large menu on 2nd Avenue
Posted by Grieve at 4:10 AM

They got their beer and wine license approved last night at the CB3 meeting. They tried to get a full liquor license. Another addition to a once quiet block that now has something like 22 or more licensed bars and restaurants within a two block area. Amazing that more liquor will be available in an area already deemed over-saturated with liquor licenses. Menu is overpriced for a dim sum place too but then again I guess they have to pay crazy Icon rents too.

Only a rube would eat dim sum in the East Village when Chinatown is a short walk away. This joint is going to be full of screechy, drunken affluent millennials.

I ate there the other night and it's good. No pretense. Not a bad addition tho the neighborhood.

Could be nice to have a real dim sum place near home, without the need to always go to Chinatown.

Twice the price of Chinatown of course.

For years, I traveled to HK every month. My go-to comfort noodle dish is not available at any of the newer regional Chinese restaurants in the area, so I was happy to find it here. Like the old Cantonese places, a fork was plunked down on my table as soon as I sat down and the manager spoke too loudly on his cell phone throughout my meal....just like old times..

I tried the dim sum sampler for a quick lunch the other day, it was delicious. i'll be back