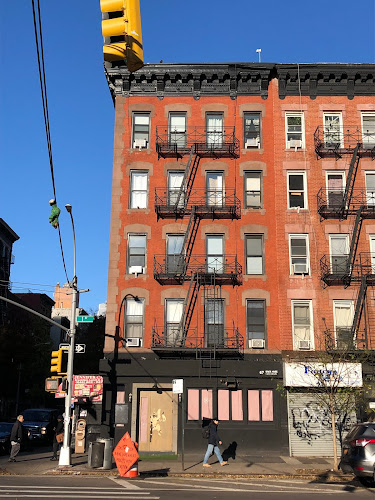 Wara, a Japanese izakaya restaurant and dinner theater, is slated to open at 67 First Ave. at Fourth Street in the spring.

CB3 OK'd a beer-wine license for Wara this month. According to the questionnaire (PDF here) at the CB3 website, Wara will be open from noon to midnight daily. The space has 18 tables seating 64 guests.

The experiential dining experience features sushi, Japanese pub-style eats and a Batsu theater, a show where actors are comically punished after losing a competition or bet.

Wara, whose name translates roughly to “laughing out loud,” took a 15-year lease at the corner spot ...

The asking rent was $15,500 a month, according to Sinvin Real Estate’s Steve Rappaport, who represented Wara. The landlord, Landlord Icon Realty, was represented in-house by Zach Levine.

The Korean cafe Space Mabi closed here without any notice to patrons last month after a year in business.

Space Mabi closes 1 year in on 1st Avenue
Posted by Grieve at 4:17 AM

A 15-year lease? Now there's the triumph of hope over experience.

They just signed a 15 year with Icon Realty??? First mistake. I will give this place 2 years before Icon screws them over and they are closed.

Man, I would not go into business with you.

Tell us more about icon and their practices. As an E village business owner, very interested