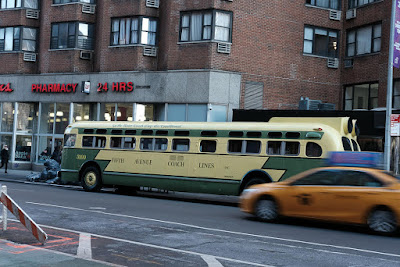 Derek Berg spotted one of the MTA's vintage buses that have been in circulation this holiday season on Fourth Avenue near 14th Street.

Here's more about this ride via the MTA:

Bus Number 3100 (1956) was the first air-conditioned bus in the United States used for public transportation. The bus was designed and built as an experiment, with this single example was purchased by the Fifth Avenue Coach Company about a year after its manufacture.

It has other features first introduced in the 1950s: a push‑type rear exit door, wrap-around seating in the rear portion, soft seating, and fluorescent lighting. After two decades of passenger service, this vehicle was assigned to the Transit Police; it was retired from all service in the mid-1970s.

Sounds luxurious, though there's no WiFi or those soothing repeat "Caution bus is turning" messages.

The buses — 11 models in total — are scheduled to be here for boarding though Dec. 21.

And you can also ride the Nostalgia Train on Sundays starting at 10 a.m. through Dec. 30 at the Second Avenue F stop. This link has the schedule and more info.

Anyway, a feel-good moment for the MTA with a tumultuous budgeting process underway.
Posted by Grieve at 12:00 PM

fix the damn subway instead?

Love this stuff, it costs almost nothing and creates a real sense of place. Or, you can look on facebook and watch other people do stuff.

I thought that was the new L train.

The MTA is more concerned with optics and nostalgia than fixing the subway and preparing for the L train shutdown. The haunted house, filming a lame joker movie and now this stupid crap, is this public transit or universal studios theme park?

IT IS! They hurried it all up1

Can we give it a fucking rest with the Batman/Batman villain/Marvel-DC Comics movies?