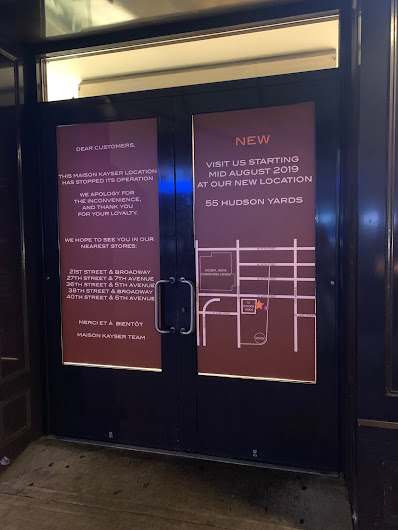 Maison Kayser has closed its outpost on Broadway between 13th Street and 14th Street. (Thanks to EVG reader Cecily Millen for the tip and photo!)

The Paris-based French bakery/bistro opened here in September 2016. As we noted at the time, EVG commenters were pleased by this arrival.

The door signage for customers, which includes an apology "for the inconvenience," lists five Manhattan Maison Kayser locations as well as news of a store coming to Hudson Yards.

Previously on EV Grieve:
Report: Maison Kayser opening a large bakery on 13th and Broadway (25 comments)
Posted by Grieve at 4:12 AM

This is not surprising. It was never completely full of customers. The flatiron location was too close as well.

For what they charge for their food, they should have been able to pay the rent.

When their West Village location on Bleecker and Christopher Street closed last summer, that was the first sign of trouble for this chain. According to Eater, they are also closing both of their Washington DC locations this month. Their baked goods are pretty good if a bit pricey, but they are not as strong on the restaurant side, and we already have dozens of Le Pain Quotidiens. If they keep picking overpriced new locations like Hudson Yards they better find a way to sell a lot more croissants.

They were situated in-between the Au Bon Pain on 14th St and Union Square West and the Pain Quotidien on Broadway and East 11th Street, how many Frenchified places can the area support? Apparently not three.

Just a little add-on to Gio's comment.
I just now walked Bleeker, from Hudson to Christopher. I've never seen so many closed-up shops along that strip in my entire life.
It looked like 8th st, between 6 ave and B'way did back in 2008.

@4PM That whole stretch of Bleecker Street is a testament to a bunch of greedy landlords gutting the entire strip of retail in order to try to turn it into another version of Rodeo Drive, and it failed miserably. The new stores also drove customers away from other local shops by making it feel so exclusive and overpriced. It reminds me of West 8th Street a few years back too, which finally seems to have filled in many of the empty stores, but a few of the newer ones have also closed. That part of the once charming West Village is mostly gone.

The decline of Bleecker street started when a pet store called Bird Jungle closed down and was replaced by Magnolia Bakery. As soon as Magnolia Bakery was featured on Sex and the City, and chains like Marc Jacobs started moving in, it was all over.

The NY Times did a great article in 2017 on how badly the landlords and their upscale tenants misread the neighborhood. Here’s an excerpt:

“Someday urban planners and retail executives may want to debrief Robert Sietsema. As someone who has lived at the corner of Bleecker and Perry Streets for 27 years, he has witnessed the rise and fall of a luxury shopping district that grew out of workaday surroundings in the 1990s and has left empty storefronts in its wake.

Bleecker Street, as Mr. Sietsema wryly noted, became “the epicenter of the designer-store revolution, whereby many of the old, functioning stores, like bodegas, laundromats and video stores, were replaced by shops selling $400 T-shirts.”

During its incarnation as a fashion theme park, Bleecker Street hosted no fewer than six Marc Jacobs boutiques on a four-block stretch, including a women’s store, a men’s store and a Little Marc for high-end children’s clothing. Ralph Lauren operated three stores in this leafy, charming area, and Coach had stores at 370 and 372-374 Bleecker. Joining those brands, at various points, were Comptoir des Cotonniers (345 Bleecker Street), Brooks Brothers Black Fleece (351), MM6 by Maison Margiela (363), Juicy Couture (368), Mulberry (387) and Lulu Guinness (394).

Today, every one of those clothing and accessories shops is closed.

Indeed, over the past year, Mr. Sietsema, the senior critic at Eater NY, has watched with mild schadenfreude but greater alarm as his neighborhood has undergone yet another transformation from a famed retail corridor whose commercial rents and exclusivity rivaled Rodeo Drive in Beverly Hills, Calif., to a street that “looks like a Rust Belt city,” with all these empty storefronts, as a friend of Mr. Sietsema’s put it to him recently.“

@Giovanni - Actually, I think the decline started a bit earlier, when the Bleecker Street Cinema closed in 1991. That unmoored that corner and opened it up for vital necessities on the site like a Duane Reade, which occupied part of that hallowed space for a while.

@Gojira. That’s true for the part of Bleecker Street from LaGuardia Place to 6th Avenue, but West of 7th Avenue we still still had a nice decent stretch of retail, until Sex and the City brought in the tour groups. For now the park of Bleecker between 6th and 7th Avenue still retains some character, we still have John’s and Joes Pizza and Roccos, but plenty of chains are still trying to move in, luckily most of the spaces are too small for them. Earlier generations will tell you that Bleecker Street went downhill once the 1960s were over, and that’s probably the truth as well.