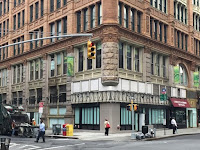 Residents often say they wish there was another bakery around here. Not sure if this is what anyone had in mind.

The Paris-based Maison Kayser is opening a 3,000-square-foot location on Broadway at East 13th Street, the Commercial Observer reports.

This will be the ninth location in the city when it opens in early 2016.

Here's some Maison Kayser background via the bakery's website:

Founded by Eric Kayser in Paris in 1996, Maison Kayser is an authentic artisanal French Boulangerie, meaning that bread and other baked goods are mixed and baked on-site all day long.

Recognized as one of the most talented artisan bakers of his generation, Eric Kayser has built his reputation on his passion for bread, the quality of his products and his incredible skill to combine authenticity and innovation in the world of French artisanal bakeries.

Born into a family of French bakers, dating back four generations, Eric Kayser started his baker apprenticeship at age 14. He was exposed very early on to the art of baking...

In 1996, he opened his first bakery, Rue Monge, in the heart of the Quartier Latin in Paris, France. It was an immediate success and as of today, Maison Kayser has over 100 shops in over 20 different countries!

The previous tenant on Broadway and 13th, COSI, closed back in the summer.

Photo by Nick Solares/Eater
Posted by Grieve at 4:12 AM

Right next door to Max Brenner—Chocolate by the Bald Man.

no one knows bread like the frogs! I'll take their baguette for a spin. in the meantime until they open, go down to Le Petit Parisien- Fantastic!!!

It's a bakery CHAIN. Please go away.

I went into the chocolate place one year on my way to an xmas party, it was filled with groups of tourists just there to eat samples. Union Sq is now a mini times Sq so expect more of these oversized and tourist magnet shops to spread throughout "mid-town south" all the way to Soho.

Kayser is a mini-chain, but they make incredible bread. Best this side of Paree. I hit the one on 21st and Broadway like 3x a week (and I have the chub to prove it, alas).

For most of my baked goods, I've gone to Breads on the west side of Union Square. Their croissants are great, and the chocolate hazelnut babka is perhaps the best I've had.

Maison Kayser is fine, but why another one? There's already one a couple of blocks north of Union Square, do we need another one (on the same avenue, no less) just a block south, as well? Probably not too many smaller shops that can afford the space, I bet.

i've heard the Pillsbury Doughboy is a silent partner.

This place is really really good. Even the nay sayers will enjoy it. It is pricey but the quality is excellent...

The quality of this venue is superb. I've visited a few times when I've stayed in Paris. So happy. I will be there quite a bit. :)

Expensive place, just right for the silicon-valley-ization of the area. Only affordable if you are a tourist or if you work for FB, google, etc. and can comfortably pay ultra high rent for your "luxury" digs.

Why are people excited about yet another high end version of one of the most basic foods we eat, bread. Have any of you ever been to Eataly? This is for tourist and the wealthy and only promotes the area as a foodie, tourist, lifestyle destination and is not servers those of us which live here. Wake up.

Are there any neighborhood bread bakeries (other than bagels) that people like? Easy access to fresh bread in the morning is one thing I miss from time in Montreal. I'm at 4th & B, so Bway & 13th is a bit of a schlep.

You know there are people in this neighborhood that have lived here for 30 years and actually make six figures, right?

"You know there are people in this neighborhood that have lived here for 30 years and actually make six figures, right?"

Yes, I'm one of them. I came here with nothing and worked hard until I could open my own business and now work even harder. Even with a decent income I don't care to throw money away at boutique food just so I can brag about how "amazing their baggiest are". I stayed in this neighborhood this long because i like the small family owned restaurants and food stores. I am very depressed by the vanishing diner and simple affordable places to eat here. I don't want to spend $60 and up for dinner each night, that is for tourist who can justify it since they are on vacation. The rest of us are losing options to live an affordable life.

How rude, they once again open up right near le paine Quotidien. Le Paine actually has vegan foods, vegan muffins. Kaiser serves foie gras. So does David's Cafe on Saint Marks Place. I would like to ask them to remove it from the menu. Animal cruelty.

This is in reference to the last comment. Seriously? It's not about being rude You're going to ask them to remove Foie Gras from the menu? Not everything will appease every consumer's tastes. Not everything will revolve around someone's dietary needs nor will they acquiesce to your demands. It would be like telling certain TV stations not to air certain shows based on their content, which some might find offensive or inappropriate. If someone doesn't like the show, don't watch it. If you don't want to eat that bakery, don't go there. But don't ruin it for those who do.

You can't equate an offensive television show to force feeding a duck to death. You clearly don't give a shit about humane treatment of animals.

Moishe's. Pain D'Avignon in Essex St. Mkt. There must be others.

pain quotidien was one of the first high quality bakery chains in the city, i remember the one they setup at abc home carpet years ago.


i haven't tried maison kayser. i get my bread elsewhere, too many good bakeries in the city.


as for pret a mange, they are not french, but a uk chain, and not a good one at that.

do croissants count as bread?

Despite being decidedly more pastry shop than bread bakery, Croissanteria on 5th and A is very good!

This has turned out not to be true. The signage went up on the former Cosi space today, and it is a Santander Bank. There is a smaller space next door that used to be Cohen Optical, but it does not look like 3000 sq ft or anything close to it. My dreams are crushed.