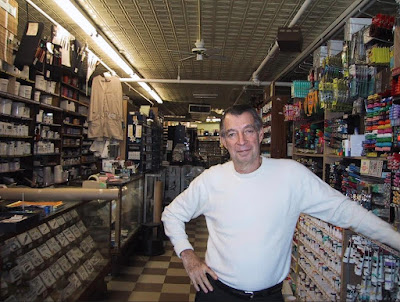 Steven Steinberg, the third generation owner of New York Central Art Supply at 62 Third Ave. near East 11th Street, the oldest art supply store in the United States, died this past Sunday. He was 79. The cause of death was pneumonia, a complication of the Parkinson's disease he has battled for the last eight years, according to his son Doug.

Steinberg began working for his father Harold at New York Central in the 1950s, and gradually built a clientele of the world's leading modern artists, including Andy Warhol, Willem deKooning, Frank Stella, Cecily Brown, among many others.

The store, largely unchanged from when it was founded by Steven's grandfather Benjamin Steinberg in 1905, was reknown for its large selection of unique and hard-to-find materials, and staff of knowledgeable, quirky artists.

A true art lover, Steinberg helped the burgeoning modern arts scene in New York City by allowing artists to pay with credit when money wasn't available (which was often the case). He also helped many artists realize their visions by working with manufacturers to develop materials such as unique papers, materials, inks, brushes and paints.

For deKooning, Steinberg developed a unique fan-shaped brush. When David Hockney wanted a series of lithographs that appeared to be drawn with crayon, Steinberg worked with master lithographer Ken Tyler and Superior Ink to create a wax-saturated printing ink that simulated crayon.

Steinberg is survived by his wife Diiana Steinberg, his children Barrie and Doug, and grandchildren Alexandra, Danielle, Hudson and Gemma.

Thank you to the Steinberg family for the photo and information in this post.
Posted by Grieve at 4:30 AM

A great, necessary New York character. I imagine the fate of the store is a waiting game. Without their paper wall, I'm nothing.

My condolences to the family. It's incredible to think of the role he played in helping so many artists to get the tools they needed to create their work.

I really hope that the wonderful Central Art continues to be in business in honor of his wonderful contributions to the world of art, and because it is the only genuine art store left.

RIP Mr. Steinberg; I extend my condolences to his family and friends.

I very much hope Central Art will continue in business, because it is (as @12:46pm said) the only genuine art store around.

I patronized this great supply store since 1979. It's the best. I only hope that the family will continue the business. There is no other art supply store like this one.