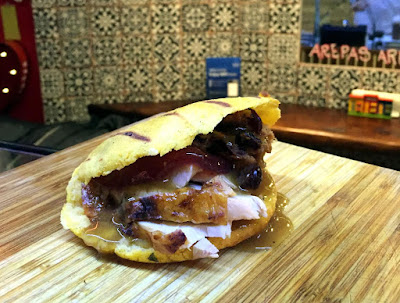 The newly opened Arepa Factory (147 Avenue A near East 9th Street) puts a Venezuelan twist on Thanksgiving with a Turkey Day feast you can hold in the palm of your hand. A sweet potato-corn flour Thanksgiving Arepa filled with turkey, gravy, stuffing and cranberry sauce will be available from Tuesday, Nov. 17 through Monday, Nov. 30 for $12.95 (note: Arepa Factory is closed Thanksgiving Day).

Arepa Factory, which opened in October, puts a modern, healthy spin on this traditional Venezuelan dish. Owner Monica Muzzo, a native of Venezuela, designed Arepa Factory to be an authentic Arepera, a casual spot for takeout and dine-in where arepas are filled to order in front of you – with a twist. Chef Rafael I. De Garate oversees a menu that marries Venezuelan tradition with new creative ingredient combinations inspired by the diversity of cultures in New York.

Previously on EV Grieve:
Arepa Factory has opened on Avenue A
Posted by Grieve at 4:14 AM

I want a Thanksgiving acai bowl, with dipping hoof of course!

No it's not Arepa = gentrification, it's an overpriced Arepa, an otherwise street and inexpensive food that can be found in the immigrant and ethnic neighborhood (neighborhood such as Jackson Heights, which is now also being gentrified) for which trustafarians and Greenwich, CTers would wait long hours for = gentrification.

That's a big problem for small businesses, Charlie. You're right about that.