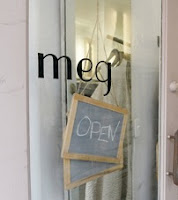 A hate-filled letter claiming to be from the terrorist who masterminded the deadly Paris attacks was mailed to an East Village boutique, ­authorities said Tuesday. The ranting note, which included anti-Semitic, ­anti-French and anti-gay language, was found at Meg, a clothing store on East Ninth Street, at 11 a.m. Monday, cops said.

The NYPD's Hate Crime Task Force is investigating the letter, whose return address included the name Abdel­hamid Abaaoud.
Posted by Grieve at 10:38 AM

Email ThisBlogThis!Share to TwitterShare to FacebookShare to Pinterest
Labels: Meg

This is scary, but not as scary as the NYU White Student Union page on Facebook.

What the hell!! Why does everyone hate Meg???

P.s. Family guy reference for those who don't know....

So small business' in the EV have another threat besides high rents.

This is the most random, dumbest thing ever. I hope the shop has some type of security camera and fliers the fuck out of this jerk.

Is it rude to ask if Meg is somehow French/Jewish/Gay? Like, what is the connection here?

Be prepared for all of these fucking pranksters and just keep living your life. Or however long you have. So tired of the paranoia. Just live. Accept what happens. That's the best you can do.

Bullshit. Don't believe everything you hear or read.

Those awful terrorists, they hate us for our f̶r̶e̶e̶d̶o̶m̶ tasteful clothing.

I think Meg is Canadian...who wants to mess with Canadians?