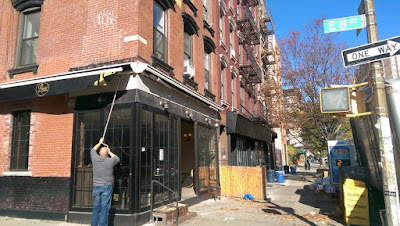 Back on Friday, EVG reader Peter from 8th St. noted some activity at the former restaurant at 127 Avenue C at East Eighth Street… where workers were clearing out the space… 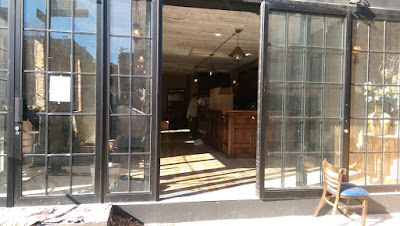 There was also a new notice (dated Nov. 12) from the Marshal noting that the landlord (in this case, Croman/9300 Realty) had taken legal possession of the space… 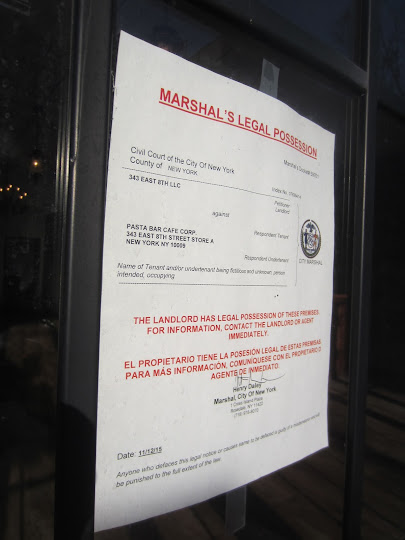 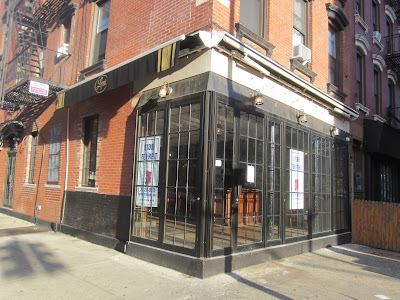 The space has been vacant now for a year. Lumé, the "Epicurean drinkery," was the last concept to try this corner… which took over for the short-lived Life - Kitchen and Bar … which had taken over for Verso, perhaps best known for a topless diner encounter.

Other restaurants here in recent years include Caffe Pepe Rosso and Caffe Cotto.

And, as previously noted, the storefront once housed a bakery … which apparently Iggy Pop frequented for cake and strong coffee in the early 1990s… 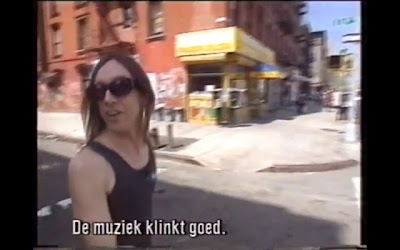 Previously on EV Grieve:
[NSFW] About the topless diner at Verso Sunday night

Where have all the bakeries gone?

This doesn't matter to visitors and the new residents of the neighborhood since they do not seek a stable favorite spot but what is new and trending on Twitter that day. If you are thinking of opening a business in this space do some research first and then decide against this one.

And that right there in a nutshell is the story of the East Village. A much-beloved bakery with the best cafe con leche *ever* anchored that corner for decades, providing affordable baked goods and coffee to all, but was forced to shutter so a parade of forgettable "upscale" businesses could come and go after mere months or a year of operation. One more treasure taken from locals so transients could have yet another overpriced playground, but apparently they don't want to play on 8th and C. Bring back Pedro's!

I'm glad to see that they removed those ratty, wooden steps from in front of the door. Maybe the new place will be wheelchair accessible, so I can go in.

Croman is garbage. Not only does he hurt people with these ridiculous rents, he hurts himself and creates more stress by having so many turnovers and vacant spaces.

Go to Cafecito, they have a great cafe con leche.

"Where have all the bakeries gone?"

They are now called bars and sell shots instead of bread.

I wonder if would-be restauranteurs can look up zombie corners like this and avoid ruining their lives with rents that clearly render non-corporate businesses unsustainable.
And btw:
Happy 100th anniversary of "The Night The Ghost Got In" as chronicled in James Thurber's hilarious short story. If you google "My Life And Hard Times" you'll find the entire book free online. I don't know if he frequented the EV - but he mentions one of his dogs having a puppy at 11th@5th Ave. in the book - so he got pretty close.

Verso had great food. Too bad the ownership was terrible.

This place is cursed. I've lived around the corner for years and wonder why this location has such a difficult time. Perhaps another bakery is a good idea?

That bakery was called Rebecca's, right? It seemed to me like they might last forever on cop business but, alas, when the precinct moved back to 5th St, their business dropped off. The baked goods were dodgy but wonderful and way cheap. There was steam table action for lunch and they did make a fine Cuban sandwich. And, up, the coffee, fifty cent coffee, was luscious and creamy and sweet. It's sad that there are essentially no bakeries like that left in Manhattan. Sunset Park has a few, Queens has some but . . . not so many any more.

There is a lot of questionable activity beyond the owner that has gone down behind the scenes here. It's been empty for a reason.

P.S. Pepe Rosso was a nice little place, nice food, fair prices, and service was good, too. (I remember the cafe con leches from years ago; it was a fine cup of coffee!)

The hardest part of this (other than the disaster for the business owners, who are tanking left and right all over the city, are you listening, city government?) are the endless months of empty storefront after storefront.

It doth not a neighborhood make...

The owners of the original restaurant were illegally subletting the space to Life and Lume which led to a lengthy court battle hence the empty storefront. This place was wrapped up in litigation for nearly a year. Don't blame the landlord, even if they are some horrible real estate greeder... blame the owners of Verso and their shady dealings.