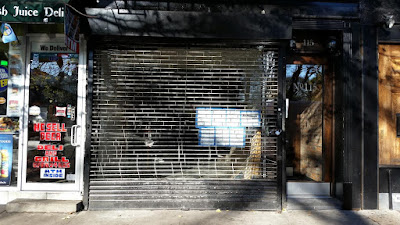 Workers have been renovating the storefront at 115 Avenue A near East Seventh Street.

According to a tipster (and confirmed with the contractor), the space will house the sales office for developer Ben Shaoul's condos going up nearby at 100 Avenue A.

The residences at the new 6-story 8-story building will start at $1.3 million.

The previous tenant at No. 115, the gift shop Alphabets, closed here in in February 2014, merging with their newly opened location at 64 Avenue A between East Fifth Street and East Fourth Street.

Previously on EV Grieve:
The retail space at Ben Shaoul's 100 Avenue A is available for $24.5 million; plus, naked model marketing clarification!

Finally. Only a year ago, that block was dangerously close to being a serious blight.

To think we lost a wonderful store like Alphabets so that a rapacious predator like Ben Shaoul could then befoul the space. Better it were left empty, it would be a better use of the air inside it.

Gojira, We did not lose Alphabets, they moved.

I hope for heaven's sake that his new office, the portal to his EV(il) empire does not get tagged.

"According to public records, the building at 115 Avenue A was sold in August 2012 for $3 million. The LLC that bought the building shares the address as the notorious 9300 Realty (owned by Croman Realty). A tipster told us that Alphabets could not negotiate a new lease."
So Shaoul is renting from Croman and the broker was Perl? Talk about a menage a trois.