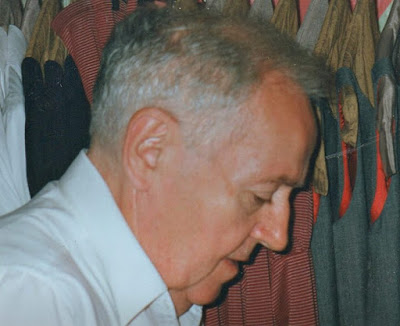 LA-based TV host/interior designer Mark Montano, who once had a boutique in the East Village, writes on his blog about a longtime friend and neighbor — Walter Przedpelski, who recently died at age 91.

Here's an excerpt from Montano's tribute, which includes several archival photos of Walter:

Walter was born IN the apartment on 9th St. between 1st Ave. and Ave. A, where he lived for almost 92 years. He first lived there with his mother and sister and then alone after his sister left and his mother passed. I believe that was sometime in the 1950s. I wish I had time to tell you all of the stories he shared with me over the years. Like how excited he was when they first got a toilet on each floor and didn't have to use an outhouse anymore. Or how he would take the tin milk bucket to the corner for fresh milk and swing it around on the way home without spilling. Or how he and his friends would play kickball in the street when there were no cars and only an occasional horse. ... I have a thousand stories but as I write this, all I can feel is a huge hole in my heart.

Image via Mark Montano
Posted by Grieve at 9:01 PM

RIP Walter. Hang in there, Mark. Enjoyed reading about Walter's life...would love to learn more about earlier lifestyles here in the hood. The elderly have so much to offer us if we would only listen.

I enjoyed reading that and wish I'd known Walter. Thank you for sharing.