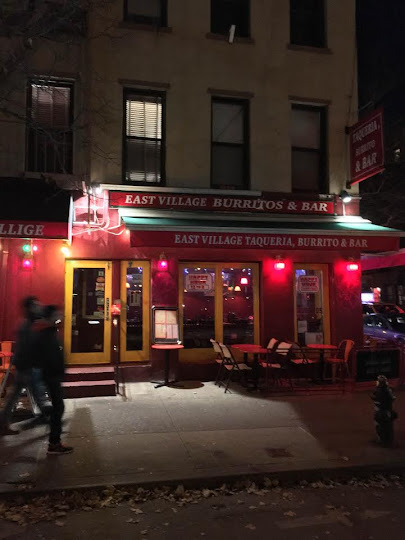 As we pointed out back in March, Figaro Cafe Bistro Bar & Grill changed its names/concepts to La Esquina Bar & Grill here on First Avenue at East Sixth Street... Perhaps to alleviate any confusion between this La Esquina and the Kenmare Street establishments (La Esquina Taqueria and Cafe/La Esquina Brasserie & Tequila Bar), the name evolved to La Esquina Burritos and Bar.

And some time in the past two weeks, the place changed names again, to East Village Burritos and Bar.

Unfortunately, the name change hasn't inspired any additional dinership... when we walked by on Friday evening, the restaurant was empty... 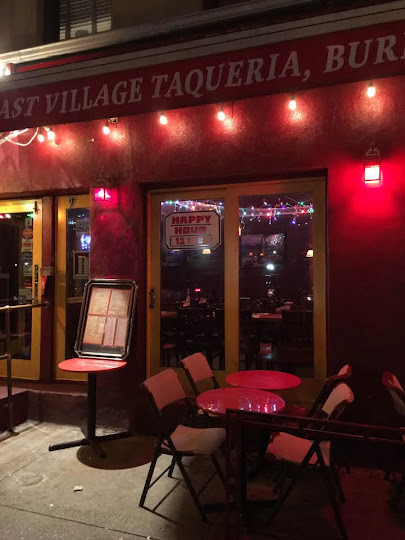 After Banjara left the corner, Figaro Villaggio, an Italian bar-restaurant, opened in January 2014. They later changed the name to Figaro Cafe Bistro Bar & Grill and, by November 2014, gave up part of the space to an Indian restaurant called Apna Masala. (All from the same owners, as we understand it.)

And at 326 E. Sixth St. between First Avenue and Second Avenue, Spice Cove has closed... and Banana Leaf, a Sri Lankan restaurant on West 28th Street, is on the way in... 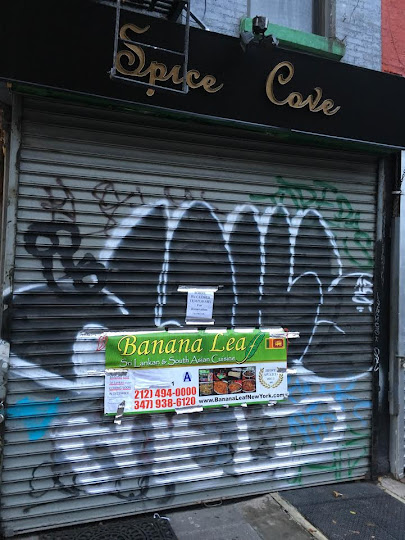 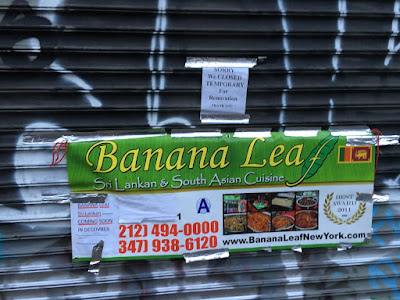 Spice Cove and Banana Leaf apparently share the same ownership, and will serve Sri Lankan and Indian specialities from both restaurants.

Banjara moving soon to the Haveli space on Second Avenue

La Esquina Burritos & Bar signage up on 1st Avenue
Posted by Grieve at 4:14 AM

I feel sorry for the owners of this (these) restaurants but it seems they need help marketing the place or perhaps the food is not good enough for repeat customers. To stay on top of foodie trends doesn't sound easy but to be empty on a weekend night is nearly impossible in today's EV.

It's a useful place for a cheap beer while waiting for a table at Upstate.

I hope you do like the NYTimes, and have the 'obit' for the Banana Leaf closing all ready with just the details to be filled in?

Sri Lankan? That can't be a bad thing; the hugely popular NY Dosas is Sri Lankan. And Banana Leaf on 28th street was voted New York's best Sri Lankan in 2011.

When Banjara was here, the place was always busy. Bring back the Indian food.

"Perhaps to alleviate any confusion" - as if. They were intentionally trying to confuse people to cash in on people who mistook them for a new offshoot, or found them on Grubhub and thought La Esquina delivered. They only changed it to "East Village" when they got the inevitable cease & desist order.

Ate there once with my bf; it was pretty sub-par Mexican. Lower than Benny's and Paquitos. Seriously. some stuff was hot on the outside, cold on the inside as if it had been microwaved. I think they were envisioning hoardes of college students drinking pitchers of beer and sangria and eating marginal Mexican food as a second thought.

Meanwhile... Haveli used to be hands-down my favorite Indian. Since the merger with Banjara, the menu and recipes changed and now it's not. Lose-lose.