[Updated] The Gerber Group responds to criticism over Mr. Purple 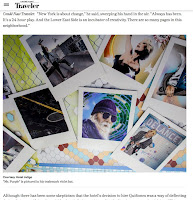 According to an article in WWD, the bar, featuring an outdoor pool and cocktails in the $14-$15 range, was inspired by Adam Purple, the well-known Lower East Side environmentalist and activist, who died on Sept. 14 at age 84.

News that the upscale bar named itself for Purple, who, in the mid-1980s, created a five-lot, 15,000-square-foot garden amid the ruins of the Lower East Side and spoke out against unchecked development, prompted criticism from some readers/residents here and here and here.

The Gerber Group, who operates the bar space, sent us the following statement this morning in regard to Mr. Purple to show that they are committed to supporting the local community:

The lobby mural in question is the work of prominent graffiti artist Lee Quiñones, who grew up on the Lower East Side in the 1960s and 1970s.

A representative from Russ & Daughters reached out to us with a statement:

Good to know their community involvement extends beyond getting well heeled people liquored up.

Speaking only for myself, I cannot remember ever seeing or hearing anyone refer to him as "Mr. Purple." I hope folks who knew him personally or followed his work more closely will correct me if I'm mistaken, but I don't recall that happening even once. It was always "Adam Purple." To me this is yet another tell that these corporate suits are just pulling this whole thing out of their collective asses and no one involved has the slightest clue what he or she is talking about.

At this point they'd be better off claiming their high-end hotel bar was named after The Purple Man, the Marvel supervillain played by David Tennant in the Jessica Jones series on Netflix. The association with a psychopathic rapist would probably suit their target audience better anyway.

But but but the community!

No matter how they spin this, they are using Adam's image without his permission. If this was indeed conceived in 2014, then why did Adam not know about this.

I would love to see one of his family members sue them for appropriating his legacy for profit. Did anyone who runs this place ever even meet the man?

Still clueless trying to justify a real human being's life to a local fish, knish and a gelato shop that looks like a 3M laboratory. None of this gives them to right to appropriate his (popular referred to) name, his image and worst suggest this posh bar is more than just a posh bar and has absolutely nothing to do with what this man represented. Shame on them. Perhaps a picket outside of this hotel would help them change the name.

I thought it was honoring Prince. ; )

Still clueless capitalist centrists(sic).What else are they going to say.

I can't take credit for this (Slum Goddess Eden Brower came up with it) and its brilliant:

"Adam Purple would have never been allowed in here."

No amount of backpeddling, blood money or faux charity excuses Gerber Group and their phony attempts to assimilate Adam Purple into their fancy cocktail bourgeois shitshow.

Their only possible course of action is to remove Adam Purple's name and use of purple and rebrand it to something else.

Until then, this place is boycotted, banned, and banished from any events I attend, sponsor, and support.

Can you respond to them and ask them if they got his permission and let us all know. If they didn't get his permission then I would join a picket out front to bring to their attention that the residents of the EV and the LES abhor this. Most people who give to the Bowery Mission don't announce it and I bet their stipulations with CB to build the hotel and get a liquor license required them to agree to hire LES residents. By opening their mouths they have shown their true colors even further.

No, this doesn't do it. The owners can give all the excuses they want. Adam would have never approved. If the community is as important as they say, they'd admit their mistake and stop trying to do us any favors. wrong, wrong, wrong for so many reasons. Please, family of Adam, sue these folks for everything.

Fuck that place. Seriously. So so lame.

LOVE EDEN, LOVE SHAWN. LOVE MY NEIGHBORS. HATE THIS SPACE AND EVERYTHING IT STANDS FOR.

Just more lies, like the CEO of the entire hospitality group coming on to comment earlier (for the last story) claiming that Adam Purple was his father. That blatant lie is a sign of a sociopath. And giving 30 percent employment to locals? Oh thanks, may I please wait on your narcissistic overly entitled assholes? No thanks! It JUST GETS WORSE AND WORSE with these idiots. I say picket. WHY NOT? EVERYTHING THEY SAY AND DO IS SOOOO WRONG. Whatever they are paying their PR "PROFESSIONALS", it's too much. Just how much back peddling does it take to see that YOU HAVE EGG ALL OVER YOUR FACE?

Why doesn't someone reach out to Adam's son? Isn't he in the UK in publishing or something? HE SHOULD SUE THE PANTS OFF THIS GROUP; force them to remove Adam's good name from their money-making machine of a heartless brand.

In honor of Adam, I’ll bike ride up to Central Park, get a load of horseshit, and dump it right in front of their door.

Hmm...I added the Wiki info to show that whoever wrote claiming to be Adam Purple's son was spoofing us. This guy in the UK has nothing to do with Adam Purple and never commented on EVGrieve. There have been no posts here by any of the family and no one has commented knowing what their intentions are.


Personally, I can't fault the hotel for contributing to the Bowery Mission or even for supporting local food businesses. We know they all need this injection of money. Every corporation has it's charitable hook these days and at least it helps someone instead of just more lining of their own pockets. But there are additional ways for the hotel to honor Adam Purple. I hope that reasonable people in the community, especially those attached to community gardens and the family, will have an opportunity to share their views.

How about a section of the roof turned over to a community garden group or using vegs from a garden in their daily specials with mention on the menu? Collection boxes in the hotel for contributions to the gardens?

FYI- for all you litigation-happy posters out there, NY does not recognize a person's right of publicity after death (as opposed to states like California, which do). That means that while someone cannot use a picture of you during your lifetime for commercial gain, they can after you deyd. On a side note, this doesn't implicate copyright because that resides with the person who created the mural, and it doesn't implicate trademark unless Adam or someone else has trademarked his face to use on goods or service in commerce (pretty unlikely). So there you have it. Simmer down and let economic forces play out. Things are cyclical, and if people want to live in a ruined rubble-filled LES clustered around a solitary community garden, then maybe public choice will return the LES to those glory days. Or maybe not.

With much love,
Random Internet Troll

Nothing would please me more then to see this bar/club/hotel get branded with literal shit; it would be an equitable response since they created a shit storm of their own design. Why not make it real, peeps?

I understand and agree with most of the critics to this impudentness; however, we are not the the target patrons for this place. It'll be just another next thing for the transients and the new "residents" (the ones who are here on a 6-month lease from a Beginner's Luxury condomitory) to do and be, another place for those with self-illusion of selectivity and where they can chronicle their coolness and hipness via Instagram and Facebook and Snapchat. They won't even know who Adam purple was. (e.g., as someone has linked, just look at the BlueNCream photo exhibit.) To them, it's just an indigo or purpled -theme bar serving $20 purple-cocktails, where they'd ooh and aaaah when this place first opens, and then it's on to the next it thing, maybe a Beastly themed bar, to "pay tribute" to MCA.
#SIoS

Why do people think anyone needs permission to use his likeness or name the bar after him? What kind of crazy world would that be?

Nobody really expects someone will sue this bar/hotel over Mr. Wilke's image and life's work being used for a private company's profits. This is a shame campaign aimed at these carpetbagger bar owners which is the only weapon people in this neighborhood can afford and might bring much faster results than getting some hired suits into it.

Legal and respectful are not always the same thing so let's get that Hotel's PR people working overtime to spin a hole deeper and deeper in shit.

I love that Russ & Daughters has called them out now we need to get the other supposed local businesses to do the same. I wonder what the Bowery Mission has to say?

Well, with the new article in The Villager, it will be interesting to see how long this memorial to Adam Purple will continue. Who wants to hold him up as a bastion of the community now?