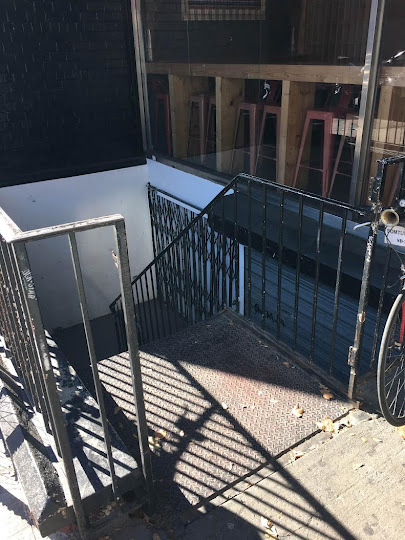 Elvis Guesthouse, which has hosted some pretty good shows since opening back in February, is temporarily suspending its live music program, The Village Voice reports.

The bar, located in a subterranean space at 85 Avenue A between East Fifth Street and East Sixth Street, has reportedly been drawing complaints from residents who live in the building.

Elvis Guesthouse co-owners Zachary Mexico and Billy Jones, who operate Baby's All Right in Williamsburg, were also behind the previous occupant here, Arrow Bar, which closed in January.

Per Mexico in the Voice:

"There was a bar there that wasn’t very busy, but then it became a bar that was pretty busy, and people were not used to having people out there and they got upset – that’s it. Anywhere where the real estate value – both of commercial rent and apartment rent – is this high, it’s always going to be difficult. Neighbors complain. And when neighbors complain all kind of other stuff starts happening."

He hopes to come to some resolution with neighbors and the live music by the end of the year.

Back to the Voice:

Tonight's concert featuring Wild Moth and Perfect Pussy is still on… and it will be the last for now.

This is a busy stretch of Avenue A, with people waiting for tables at Thai hotspot Somtum Der above Elvis Guesthouse as well as next door at sushi restaurant Takahachi and the live music venue Drom below that.

Elvis Guesthouse officially ready for occupancy tonight
Posted by Grieve at 4:15 AM

Email ThisBlogThis!Share to TwitterShare to FacebookShare to Pinterest
Labels: 85 Avenue A, Elvis Guesthouse

The line Friday night wrapped around the corner of 6th Street and then some. It was hard to imagine all those people fitting into such a small space.

I live in the building and it's not as simple as crowds of people smoking outside. I chose to live on this block and knew that was a consequence of the location. Elvis Guesthouse is not properly sound proofed to allow for live shows. I live on the 5th floor and we can hear the music in our apartment sometimes. I can't even imagine how loud it must be for the 2nd floor apartments directly above the bar. The people who run Elvis Guesthouse are nice people. I always tell them when it's too loud instead of calling the cops, but until they figure out a way to soundproof the venue they shouldn't be holding live music acts.

it would be great if they could soundproof. They seem gracious which highly is unusual around here. There are resolutions indeed.

With most businesses it's as simple as not having acordian doors or closing the back door and not using the backyard, simple right? But nooo most restaurants and bars are like fuck you-will gentrify.

I hope they will find a resolution. I really like Drom and Elvis Guesthouse. All the best for everyone.

You cannot soundproof a live venue. It is hard enough to soundproof a small recording studio. The best you can do is mitigate.

I also live in the 5th floor of that building and can hear the music fairly clearly at 2-3am. I could care less about crowds outside the building or the smokers. I've submitted several complaints to 311 about the noise issue, I feel really bad for residents on lower floors.

I would love it if they could soundproof the venue somehow.. Live music is such an important part of the culture of the area.

"they just live in a building on a crowded street and don’t like people hanging around smoking and being loud." - oh, the nerve of people wanting to sleep at night.

Remember when places like this opened in commercial or manufacturing zoned areas. Now Manhattan has become so dense, that it's forced bad neighboring situations like this.

I'm sure that all sides involve good people, but the system has pitted them against each other. Seems like the all-night venue needs to be in a building where workers go home at 6pm and no one is trying to sleep.

There is another basement level venue Drom in that same building that Elvis GH is in. It is on the north side, closer to E6th and horseshoes around the back of the same condo building. Its actually much larger sq ft wise than Elvis GH. It seems like the noise and crowd issues should be equally assigned to both venues.

BUT....The worst offender is Sing Song Karaoke next door closer to E5th with crowds of clueless bros/ bro'ettes. They talk on their cellphone/scream/woohoo loudly and block the sidewalk smoking and teetering on their heels.

Sing Song's security does NOTHING to quiet, clear a walking lane for pedestrians or control them. They are the WORST offenders on that strip btw 5th and 6th on A by far.
I live on 6th btw A/1st and deal with it on a nightly basis (PS- I'm not old, I just can't deal with immature stupidity).

Not sure what Drom is doing differently, but I never once heard music from Drom in the 3+ years I've been in 85 Ave A. The noise is 100% coming from Elvis..

I live on the 7th floor and before Elvis Guesthouse opened we never heard music from Drom. Now I can feel the bass in my apartment until 3am. Everyone living here understands that the EV is loud but this is different- they should just soundproof like Drom.

I live on the 6th floor of the building and the music is so loud my bed shakes. The worst thing is that this happens midweek, not just at the weekend. Last thursday night I was kept awake until 3am. I love having great music venues nearby. But this is beyond anything that a neighbor should be asked to put up with. I have never heard any noise from Drom. EG should take steps to lower the noise and limit their hours midweek.