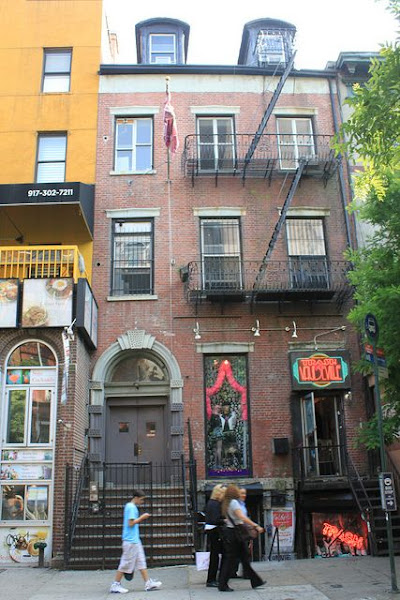 News arrived yesterday that 4 St. Mark's Place, the landmarked building whose first owner in 1833 was Alexander Hamilton’s son, is for sale.

Here's the news release that we received:

One of the rare surviving and significantly intact large Manhattan townhouses of the Federal period, 4 St. Mark’s Place is over 10,000 square feet and offers four, free market apartments and 5,668 square feet of retail space on the first floor and lower level. Since 1975, the retail space has been occupied by the legendary vintage clothing retailer Trash & Vaudeville, which is relocating to a new site.

“The vacant retail space on the first floor and lower level will offer a new owner significant future upside on a vibrant East Village street that attracts a tremendous amount of foot traffic,” said Ron Solarz, executive managing director and principal of Eastern Consolidated. “Over 53,600 students attend major colleges and universities in the area including Cooper Union and the Manhattan Campus of St. John’s University, which are half a block from the property, and New York University, which is a few blocks away, making the area highly desirable for use as student housing.”

The St. John’s University campus is located in a newly constructed 400,000-square-foot mixed-use office and retail development at 51 Astor Place, which is anchored by TAMI and financial services tenants including IBM. In addition, Cooper Union has completed construction on its state-of-the art engineering building, which includes a prominent retail space at the northeast corner of East 6th Street, and a new 17-story dormitory built on the east side of Third Avenue between St. Mark’s Place and Stuyvesant Street.

The neighborhood also includes a wide array of hip restaurants and retail shops, and is conveniently located within blocks of the 6 train at Astor Place, the R and N trains at 8th Street, and the L at 3rd Avenue and 14th Street.

Also known as the Hamilton-Holly House, 4 St. Mark’s Place was built in 1831 and designated a New York City landmark in 2004. Col. Alexander Hamilton bought the townhouse in 1833 and shared it with his wife, Eliza, his widowed mother, Elizabeth Schuyler Hamilton, her daughter Eliza Hamilton Holly, and son-in-law Sidney.

In the 1950s and 1960s, a number of cutting-edge performance art venues were located in the building including the Bridge Theater, which hosted the likes of Yoko Ono, The Fugs, and the Bread and Puppet Theater.

The asking price is $11.9 million. (You can find the listing here.)

As we first reported in July, Trash and Vaudeville is moving to 96 E. Seventh St. between Avenue A and First Avenue. (They have yet to announce an official move date.)

No. 4 is likely not the last historic building on the block between Second Avenue and Third Avenue to change hands. Multiple sources have told us that No. 20 — the landmarked Daniel LeRoy House — is in the process of being sold. (There's nothing yet on the transaction in public records.) The circa-1832 building was home until October to Sounds. The Grassroots Tavern still anchors the subterranean space.

Previously on EV Grieve:
Exclusive: After 40 years, punk rock mainstay Trash and Vaudeville is leaving St. Mark's Place
Posted by Grieve at 4:30 AM

I am always surprised by the real-estate sales pitch as if mentioning there are tons of students nearby as well as bars is a good thing. It seems the important part of this building for them is the commercial space which they hope to snare a Rag & Bone or similar upscale store certainly a local business will be priced out. The block is still filed by gawking tourists looking for some sign of its "punk rock" past but instead a few piecing / tattoo places and the latest fro yo/bubble tea/ fill in the blank trending junk food shop.

There is some relief that the building is landmarked so there will not be 3 floors added with a party rooftop to come.

There is some relief that the building is landmarked so there will not be 3 floors added with a party rooftop to come.

The new owner can always get a variance, tho.

Too many f'n colleges around here these days. College is great and all but give us a motherf'n break here. It's inhumane to put this many college students into a neighborhood where regular people are trying to live and work. Conversely I guess we could just turn this whole f'ing downtown into one colossal shared multi-school campus. How awesome would that be. By awesome I mean totally vomitous.

Dude, this is NOT a selling point lol: "Over 53,600 students attend major colleges and universities in the area including Cooper Union and the Manhattan Campus of St. John’s University, which are half a block from the property, and New York University, which is a few blocks away, making the area highly desirable for use as student housing.”"

Having looked in a job as a rental agent in Manhattan and deciding against it recently, I was surprised by the amount of apartment listings targeted to students and recent grads as shares. Most were just inhumanly lacking privacy, had poorly fashioned partitions (not illegal walls, but poorly done or conceived). Bedrooms that were smaller than I had ever seen in my 20 years in NYC. Poor security etc. But all were asking rents that were extremely high, higher than any normal renter would pay. That is why the ad me tio s the students. They just pay more for a lot less apartment.

I don't think this price is so expensive for that location and with the T&V space for retail.

"The neighborhood also includes a wide array of hip restaurants and retail shops". Just WHERE might those "hip" spots be?

Real estate parasites and monied transients have caused the truly "hip" places out of business.....

Just have to say again that this is the building where Off-Off Broadway began with Julie Bovasso's Tempo Playhouse and a production of The Maids for which Julie won the very first Obie Award.
http://www.villagevoice.com/arts/watering-the-off-broadway-garden-7137900

"There is some relief that the building is landmarked so there will not be 3 floors added with a party rooftop to come.

The new owner can always get a variance, tho."

For instance, 329 East 10th Street. Landmark building, landmark block. Icon bought the building, gut-rehabbed it, and built both a party garden and a party deck that covers literally the entire roof and is actually visible from the street. I spent months corresponding with the DoB and Landmarks in an attempt to get them to care; in early October Icon was told by the LPC they needed to scale back the deck but not remove it, but there was no timeline, and to date nothing has been done. Landmarks is a toothless joke.

Anon 1:47: I think the terminology of the times was he was a gentleman.

He graduated from Columbia University,
He apprenticed as an attorney in Stephen Higginson's Boston law firm and later became a lawyer.
He fought in the Duke of Wellington's Army, then returned to America to serve in the War of 1812 as an infantry captain in the United States Army; he served in the 41st Infantry Regiment from 1 August 1813 to 15 June 1815.

detail from some wiki

The timing of when he got the approval for the penthouse addition relative to when the landmarking went into effect (literally just a few hours before) was highly suspicious and, in a less corrupt environment, would have triggered some investigation by the authorities into how exactly that was arranged.

Anon. 6:57 - same block, different building; the Shaoul building is more westerly. And yeah, that scenario was highly suspect - the morning of the day the LPC announced the entire block was to be landmarked, the DoB granted Shaoul the ability to add a new floor, only stipulating that it be set back. No, 329 is another Icon nightmare; the new tenants are out in the garden every single night, usually starting at 3 AM, whooping it up. I have no doubt that next year, with the warmer weather, we'll have double the fun as they hit both the garden and the roof simultaneously, probably after the bars are closed and they are already over-lubricated, hence even more heedless - and careless - of the amount of noise they generate.

They should at least get rid of those dormers. I never liked those.