On Friday (Black Friday!), the folks at Improv Everywhere, a NYC-based "prank collective," had some 100 people camp out in front of the 99-cent store on First Avenue next to the Rite Aid. 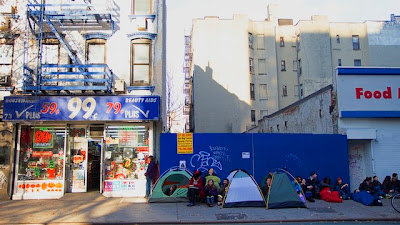 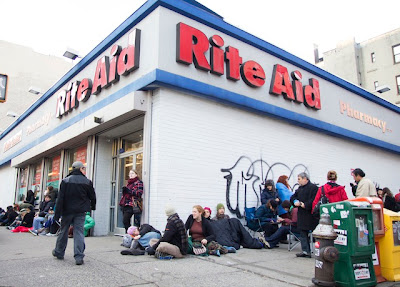 The group even had someone pretend to be an NBC News reporter interviewing people waiting in line... 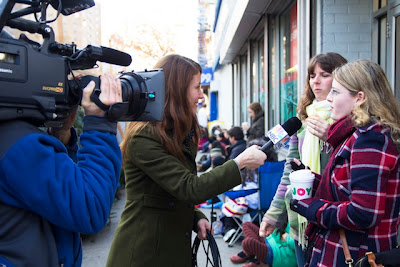 The store's proprietor arrived at 9 and figured the mob was for Rite Aid... then someone in line told him that it was for the 99-cent store...

When the store opened, the shopping began... 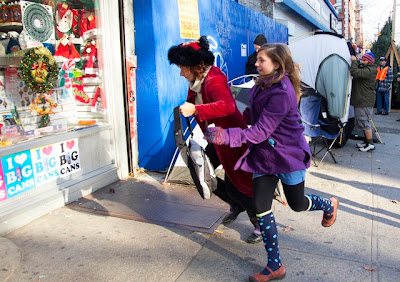 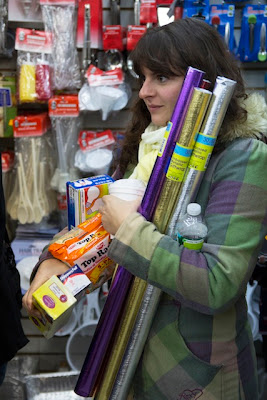 The participants did come in a few at a time and buy stuff... You can read the entire recap at the Improv Everywhere website.

Eventually the Improv leader told the store owner about the gag. "He was really excited about the whole thing and definitely appreciated the business, even if it didn’t make total sense to him why it had happened."

The Improv members also donated some of the purchases to an unnamed local charity.

[All photos via the Improv Everywhere website]
Posted by Grieve at 6:55 AM

These people really don't have anything else to do with their time? They should have taken that time and volunteered at a soup kitchen or something. This might be even worse than the real "Black Friday Shoppers".

I loved it, and the shopkeeper was surely happy to make some sales, as well. 9:16 really doesn't get it.

I hope they hit up the WELLNESS CENTER while they were in there!

Just want to point out that the video for this is 2012. Not 2015. I got really freaked out for a minute because the man with the dog they interviewed is my neighbor who died this year. Happy to see him again and happy for the store owners who are nice folks and happy I did not just see a ghost. Sort of.

I usually just roll my eyes whenever I read about the latest antics from these Look-at-me hipsters; but this one made me laugh and put a smile on my face.

They should just keep doing this and stop with the stupid 'pantsless subway ride' bull.

Can we get them to prank the Santacon idiots?

Guess November sweeps is over.

This did make me laugh