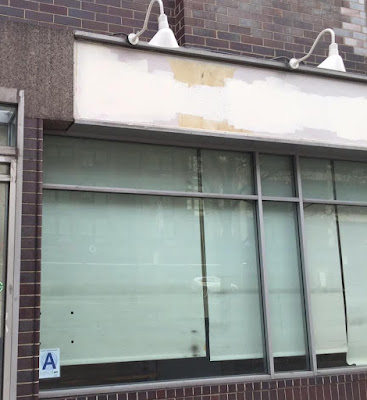 An EVG reader stopped by Pushcart Coffee on Third Avenue at East 12th Street in NYU's Third North dorm retail property this morning... only to find a sign that the place closed for good after service yesterday... 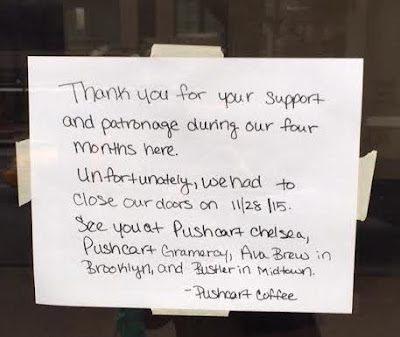 The sign simply says "unfortunately, we had to close our doors." This location opened on July 1. The other Pushcart locations remain open.

The stores on these few blocks turn over so quickly that I've stopped paying attention to the entire area completely.

I passed Pushcart several times a day, but the place looked so unappealing with broken uncomfortable chairs. I wanted to support a small business, but with all the other choices, this place landed last on my list.

Just a couple of comfortable chairs and a cost of colored paint would have made the difference..

Good thing that that Dunkin Donuts is back open!

It's a very tough business to get into. You're up against some formidable competition. I like http://www.abraconyc.com/
The premier place to get a good cup. And the owner Jamie is one of the nicest people you could ever meet. He also lives in the building where his shop is located.

All those students showed up in September but werent' enough to keep the place open for a few short months. Priceless. Note to all future EV retailers: when your broker tells you the location is a goldmine because there are 50,000 students in the area with lots of money to spend, remember they all have their own microwave ovens, Gevalia and Nepresso machines in their dorm rooms. They don't need your pricey food or coffee, and they prefer mall style chain stores. Most of these students will sit at a table all day and not buy anything, and pretty soon they will even drive Starbucks away. Let these stores sit empty for a few years, unless the rents come down it's just not worth the risk.

I agree it was an inviting environment (too industrial). Let's face it most coffee shops are not destination places--they are convenience places (convenient to home or to work). I've been to Abraco on East 7th Street;I agree that it serves good coffee, but I wouldn't go out of my way--there are a plethora of small coffee shops in the East Village that can boast of decent cups of coffee and edible pastries or small sandwiches. The EV may have reached the saturation point, but I expect that in the next months there will be numerous new ones opening (each owner convincing his or herself and investors that they cannot fail).

I walked by this place with a friend when it first opened, and I made fun of the lame sign and how uninviting the place looked, and she said Pushcart is a big name in coffee, and people would flock there. They didn't. I was right!!!!!!! Whoever ran this location didn't make any effort to draw customers. I wonder if they assumed the NYU kids would pack the place.

I am so upset! I am an NYU student and live in Third North, the dorm this store was in, and Pushcart's location was always so convenient for me. The coffee was good, the environment was nice and the staff was very welcoming. Crying as I write this

If they opened on July 1st, then they closed after 5 months, not the 4 months their sign stated.

Live nearby and tried them once, but didn't really like their coffee.

Everything about Pushcart felt very utilitarian, and the tables & chairs seemed designed to be uncomfortable (visually, at least!).

In a super-saturated coffee environment, Pushcart seemed to think its location would be enough to make it succeed, but IMO the place had no "personality." It lacked whatever it is that makes people say "hey, let's go there." Wayside feels welcoming, and even Dunkin on 14th St. just east of Third Ave. has a distinct POV.

I wish them well in their other locations. I wonder if NYU has/will let them out of their lease?

It never looked as appealing as any number of others nearby. It looked sort of generic and chain like.

I make it a point to go into the other Pushcart locations when I'm near there, because just after Hurricane Sandy, the 2nd avenue location was a cheery, generator-powered beacon of light.

That said, I only made it to this one once; it's not that far out of my way, but I'm not often on this stretch of 3rd avenue. I kept meaning to stop in for a coffee—I believe they used Perka for their digital punchcard—and they had a couple of payment options, one of which they e-mailed me about.

That said, I make cold-brew decaf at home—because so few places do—or I go to Porto Rico for a refill, or sometimes the Bean for a latte. People get set in their ways, and as one commenter remarked, it's tough to break into the coffee business. I'll continue to patronize the other Pushcarts.

Walked past there today and even their sign is painted over. The speed with which they were able to self-obliterate makes me feel as if they intended to be there only temporarily. Everything about that place seems to have been designed to be picked up & gotten out fast. (They could have a sideline advising on emergency evacuation preparations.)

It had the feel of a seedy bus depot coffee shop....What were they thinking? If they could close up so fast and have so much time left on a lease, maybe they have another business concept ready to put in it's place in a week or two. It all seems weird....

No tears here. It was pretty lousy.