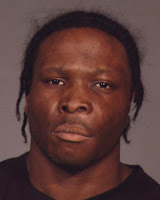 A man accused of raping a jogger in East River Park on Wednesday night has surrendered to police, according to published reports.

Surveillance cameras reportedly captured 28-year-old Paul Niles using the victim's credit card at a deli near the scene of the attack.

Police say that Niles was riding a bike when he approached the 26-year-old woman jogging near the FDR Drive and Cherry Street around 7:30 Wednesday night.

According to NY1, after Niles turned himself in at a precinct in Queens, he was charged with rape, robbery and identity theft against the jogger and with forcible touching of another victim, who he approached separately.

Per the Daily News: Niles pleaded not guilty to rape, robbery and identity-theft charges. If convicted of the most serious charges, he'd face up to 25 years in prison.

Niles also told investigators that he had been living at a rehab facility and a homeless shelter "and is suicidal."
Posted by Grieve at 8:10 AM

Have a nice life upstate