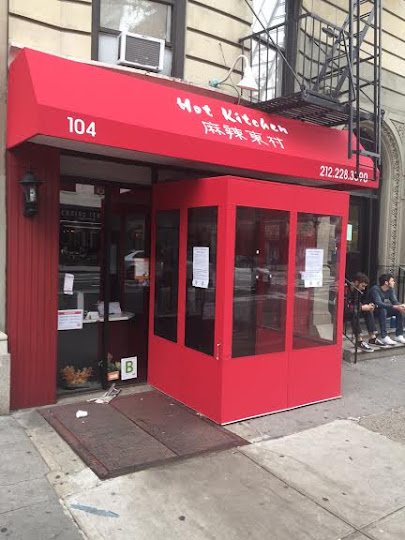 Hot Kitchen, the Sichuan restaurant at 104 Second Ave. near East Sixth Street, has been closed this past week.

EVG correspondent Steven passes along a photo of the signage on Hot Kitchen's front door... 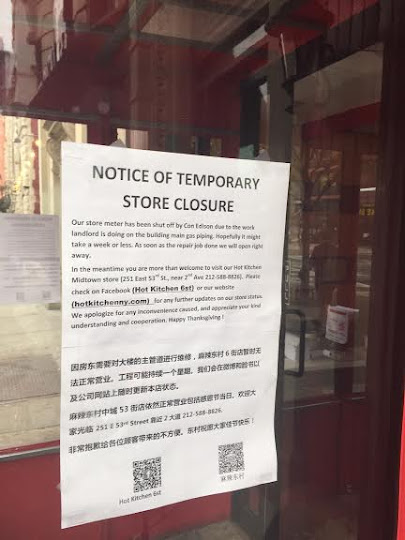 The note explains that ConEd has shut off the restaurant's meter "due to the work [the] landlord is doing to the building main gas piping."

The note also says they hope it will take a week or less to compete the repairs. That seems awfully optimistic given how long it has taken gas service to return to other East Village restaurants, such as Second Avenue neighbor B&H Dairy. On Avenue A and St. Mark's Place, Nino's and Yoshi Sushi have been closed for five weeks now due to a gas issue in its building.

And of course, Hot Kitchen sits nearly directly across the Avenue from the site of the deadly gas explosion this past March 26.
Posted by Grieve at 2:12 PM

Add this to your list. Several years back the management of my building was issued a Stop Work order and was subsequently found to have posted a fake plumbing permit on the front door. This all came about as a result of my having to report an open unattended gas line during an apartment rehab. Con Ed responded, locked the meter involved, and referred me to the DOB. The DOB Investigations Unit discovered the forged permit & fined the building.
I'd no idea of the falsification and was simply worried about the uncapped gas line. I was taken to task by the management and subsequently threatened, disadvantaged, and harassed (yes even physically harassed) by the management. Subsequently I was evicted as an "undesirable tenant". They "picked" the judge they wanted and I lost my home - no trial, nothing ever proven, no defense allowed.
GIVEN ALL THAT WE NOW READ OF THE 2ND AVEENUE EXPLOSION AND OTHER QUESTIONABLE DANGEROUS GAS LINE ISSUES IN THE NEIGHBORHOOD, CAN SOMEBODY PLEASE WRITE A STORY ON THIS EVENT IN MY EAST VILLAGE BUILDING? AND HOW AN INADVERTANT WHISTLEBLOWER AND VETERAN, AND SENIOR CAN BE HARASSED OUT OF HIS HOME OF OVER 4 DECADES BY A SHADY MANAAGEMENT?

A couple of buildings in Stuy Town -- 272 and 274 First Avenue -- have had no gas since Halloween, and they have no idea how long it will take to restore service. Apparently ConEd and the city are too busy expediting gas line work in all these new luxury condos, so the little people will just have to wait their turn.

Town and Village: Two ST buildings left with no gas due to leak

I lived in 104 2nd Ave, the building above Hot Kitchen from 2013-2015 and moved out in August. In December of last year, my roommates and I smelled gas and called our landlord, ConEd and management at the time to deal with it. For the subsequent 8 months that I lived in the apartment, the gas was never fixed after numerous calls to the management company. The best they did was send a hot plate as a bandaid.

By complete coincidence, my new roommate works with the new tenant of my old apartment, and to this day the tenants do not have gas service. Tomorrow it will be a full year since we first reported the gas leak.

I hope for their sake it is fixed this week!

Maybe the city should require landlords to forfeit ALL the rent that is collected (or considered due) from both residential and commercial tenants when gas is out for more than a week.

Currently, there seems to be NO incentive for a landlord to get the gas back on, and there sure as hell is NO penalty for keeping the gas off (see: Stage Deli, still closed since late March 2015. And also see: East Village Explosion in March 2015, NO ONE HAS BEEN CHARGED.) This is harassment by delay of return of service. It seems to me it is also the illegal taking of a business owner's livelihood by delay of service.

Does ANYONE at any level in the current NYC administration give a single shit about what has happened & is still happening to tenants & business owners who are being driven out by this vile and illegal tactic?

And not to mention my favorite new pub, Lion's Beer Store, in the same building as Hot Kitchen, hasn't had gas for weeks either, and even though they still pump out some pretty good grub without the gas, my favorites on their menu can't be done. How are businesses supposed to survive without gas. I heard the problem has been fixed but the landlord and coned still not turning on the gas. This is only a disincentive for folks to report leaks, and that's where the real danger lies. Come on people!!!!