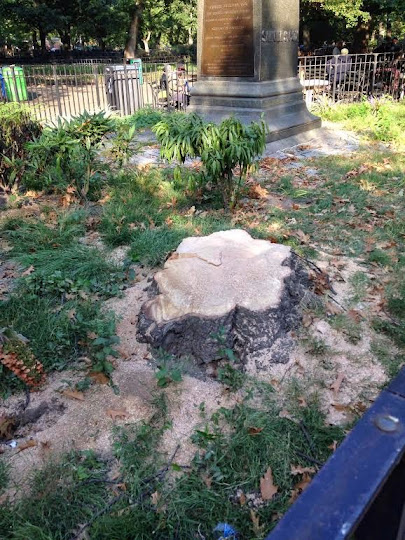 On Sept. 14, 2014, workers removed — for whatever reasons — a red oak adjacent to the Samuel S. Cox statue by the entrance to Tompkins Square Park at East Seventh Street and Avenue A.

And now, to bring some closure to this fine story… yesterday, workers planted a new tree in the space… 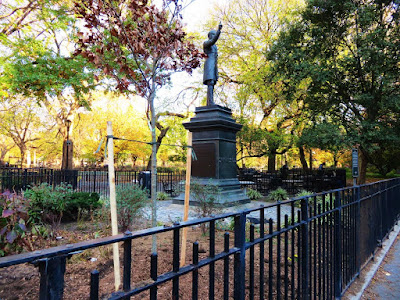 And because people asked who Samuel S. Cox was… and about the statue…

Samuel Sullivan “Sunset” Cox (1824–1889) was born in Zanesville, Ohio, and served his home state as a Democratic Congressional representative from 1857 to 1865 before being unseated. After moving to New York in 1866, Cox served again in Congress for several terms from 1869 until 1889.

Although Cox once publicly declared that his most satisfying contribution to public service was championing the Life Saving Service—founded in the 1840s to patrol the coasts and save imperiled boaters during bad weather, the group was absorbed into the Coast Guard in 1915—this statue is sponsored by U.S. Postal Service workers because of Cox’s support for their quality-of-life issues. Known as the “letter-carriers’ friend,” Cox spearheaded legislation that led to paid benefits and a 40-hour workweek for postal employees. Mail carriers from the 188 cities named on the monument contributed $10,000 for the statue in a campaign that began soon after Cox’s death.

Sculptor Louise Lawson’s statue of Cox, unveiled in 1891, depicts him orating before Congress. Lawson (186?–1899) came from a prominent Ohio family. She and her brother, U.S. Representative W. D. Lawson, both attended Cox’s 1889 funeral at which President Grover Cleveland and General William Sherman served as honorary pallbearers. One might interpret the statue’s somewhat stiff quality as representative of Cox’s steadfast stance on issues for which he advocated. 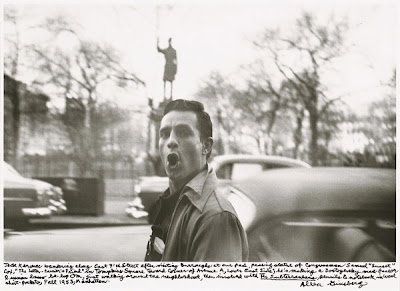 Jack Kerouac wandering along East 7th street after visiting Burroughs at our pad, passing statue of Congressman Samuel "Sunset" Cox, "The Letter – Carrier's Friend" in Tompkins Square toward corner of Avenue A, Lower East Side; he's making a Dostoyevsky mad-face or Russian basso be-bop Om, first walking around the neighborhood, then involved with The Subterraneans, pencils & notebook in wool shirt-pockets, Fall 1953, Manhattan.

What kind of tree did they plant?

And, how long do you think before it dies off?

What about a tree for Pope Mickey, he spread the green around way back when

Wow 7:58 Pope Mickey those were the days

Who was Pope Mickey,

That's awesome that they took care of the tree, the stump, and put a new tree. Usually one of those steps gets missed or it takes a long time.