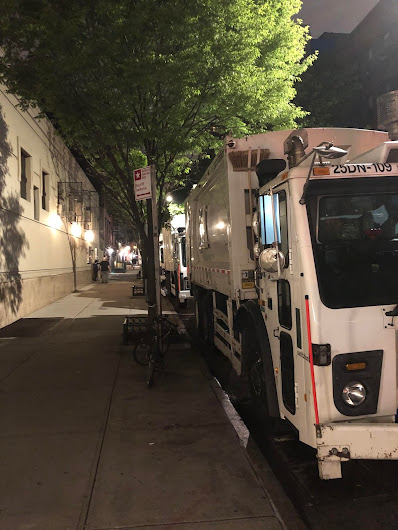 After nearly a year of meetings and direct pleas from residents of 10th Street, the city has yet to take any action to relocate the fleet of garbage trucks that park on the block west of First Avenue.

Yesterday, local elected officials joined block residents in urging an immediate solution and requesting that the sanitation trucks be removed.

🤮If City Hall won’t do it, we’ll pass legislation in Albany to do so pic.twitter.com/8EQ0reFTBg

I joined the East 10th Street community to demand @NYCSanitation finally remove their trucks which emit a foul smell & have negatively impacted residents and businesses for nearly a year. We’ve written a letter calling for an immediate solution to this gross problem. pic.twitter.com/TUy7t26chz

Happy to join colleagues & neighborhood folks to Call on ⁦@NYCMayor⁩ to get these city garbage trucks off residential streets. ⁦@bradhoylman⁩ ⁦@RepMaloney⁩ ⁦@CarlinaRivera⁩ We've made many suggestions NOW get it done. pic.twitter.com/vVnvNnaWBP

And now 11 months later residents here are still waiting for the city to do something.

Seth Stein, a spokesperson for the mayor, recently told the Post: "We are actively evaluating parking options for these trucks that keep them near the neighborhood they serve."

You can find a copy of the letter from the local elected officials to the city at this link.

A year with the issue unresolved speaks volumes about the priorities of the Deblasio Administration the worst Mayor and Administration since Lindsey. The job of the Mayor and reason for his pay check are issues like this local issues city wide issues. You are not paid to pontificate on the National stage about social issues as you in vision them. You can get your own cable Talk show call it Wilhelm Today for that when you resign. NYC voters need to be smarter at the ballot box one party rule leads to this type of ineffective government run by a Lazy man.

Oh wonderful a bunch of politicians grandstanding. That will be helpful. De Blasio is the most full of it, of course. Every time I look at the vacant lots along the water near the sanitation dispatch area I shake my head and get angry about this situation.

At this point, the theater should quit letting the workers use their space. If this takes away a revenue stream, all those elected officials can help replace the funds with other forms of financial support.

Our PROGRESSIVE White House-seeking Future President is working on this issue and NYCHA and The Subways day and night.

Such an enormous problem. I try to avoid walking near that corner for the sheer stench of you know what. It is inexcusable the sanitation department chose this area to park. I hope our lawmakers take care of this problem ASAP. I also could not imagine what it would be like to live facing this. I would have to break my lease and move elsewhere. Who wants to spend almost 3k for a flat and have to smell shit everyday up and close? Not me.

not to say that garbage trucks parked on east 10th street are ok
but oh that we could get this collection of elected "official" power to work together on say (in particular order):

Can we please put BdB out with the trash as well?

Move every single one of these trucks to outside Gracie Mansion, preferably where they will block the Mayor's SUV cavalcade to his gym. Then maybe he'll take note.

Let's cut to the quick here... if it wasn't for Rep. Carolyn Maloney this would not be happening. She deserves credit for getting involved in an issue that's not really part of her job description. But since our local officials... one in particular Ruin-The-EV-Rivera has done nothing other than issue a press release and show up at a rally 11 months ago. A good politician stays with an issue. Today pols make noise and move on... so it looks good to the constituents but nothing gets done. Maloney has been a popular and effective Rep for our district... I hope her presence will shame Death-of-the-EV de Blasio to act.

Which is why I like Maloney: she does the WORK. She cares, she pays attention, stays with an issue, and she gets results. Missy Rivera could learn a lot from her, but probably won't.

At least give them miles of designated lanes...

If you're going to thank Carolyn Maloney for finally taking action a full year after this situation became a problem, then you also need to thank her for helping to push out the District 6 and 8 Sanitation Garage on East 73rd Street years (and now perhaps decades) before the replacement Sanitation garage on East 25th near Waterside Plaza could be built, which she also objected to. Now the proposed Hunter College Brookdale Campus garage is on permanent hold, having been blocked by Carolyn Maloney, Brian Kavanaugh, Brad Hoylman and Bill DeBlasio (with the help of Dan Garodnick) during the 2017 election to get a few extra votes.

Our local leaders should have never allowed the old Upper east Side garage to be demolished and sold off to Memorial Sloan Kettering until a new site could be developed. Where did they think all these trucks were going to be housed? Since Midtown and the Upper East Side has already succeeded in pushing trucks out of their neighborhood, guess who gets to house them now? We do.

The bottom line is until a new sanitation garage can be found to service the Midtown and Upper East Side districts, then we will all be smelling the residue of garbage from Murray Hill, Gramercy Park, Midtown South, Turtle Bay, the UN, Sutton Place, Beekman Place, Peter Cooper, Stuyvesant Town, Yorkville, Lenox Hill, and Roosevelt Island. At least the trash comes from a few more upscale zip codes.

This issue has Bill DeBlasio written all over it. I don't even bother referring to him as mayor anymore. He's too busy campaigning for the democratic seat in 2020 to give a flying you know what about our city and its citizens. It's such a joke. He must be living on Jupiter. I was such a moron in voting twice for that weasel of a man. Change only happens at the top. Then it trickles down. Just look at #45 and the irreversible damage being done to the white house and the country. All of his cronies perpetuate his lies and BS and no seems to be held accountable. The entire Trump administration is diseased. If the guy on the top is complacent and apathetic, why shouldn't all the others be as well?

I am sure there are a few good women and men fighting for us here, but why do we have to fight for basic things? Sanitation trucks parked outside in front of people's homes and businesses? In the east village? None of us wishes to live or work in or near a toxic dump. I am tired of hyperbole. Where the fuck are my taxes going to? I am sick of empty promises. Whats happening on that block is merely an illustration of the dysfunction and blatant corruption in Manhattan. Our community deserves better and we certainly deserve a real leader who will walk the walk not just talk the talk. We want action and results. Get to work and do the jobs you were elected to do!

Where the fuck can you get a "flat" for under $3K? That's impossible.

If you want to get rid of the garbage trucks I suggest you contact Capalino+Company to do the heavy lifting. I don't know how much it will cost to lobby the mayor, but I'm guessing at least 50K.

Maybe the officials who are looking into this problem can take a walk down Second Avenue and take notice of the amount of garbage and litter on the sidewalks and in the street that should be in those trucks. Perhaps we can give them all brooms and dustpans to pick up some of the garbage in their own house. Yes, this is supposed to be their house since they represent our neighborhood in some capacity. Or do they live the same way at home?

Despite additional numbers of garbage trucks, East Village has turned into a garbage dump over the years. You see trucks roaming around in the morning and in the afternoon, but this neighborhood smells worse and worse each day.