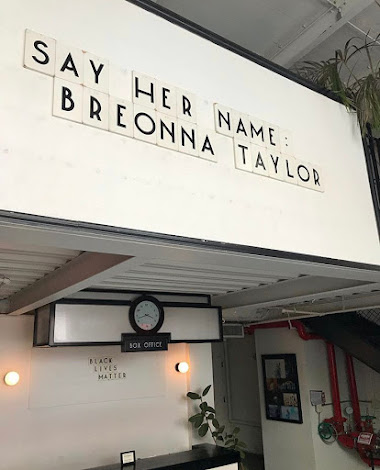 The independent cinema down at 7 Ludlow St. is opening its lobby this weekend (2-6 p.m.) for people taking part in peaceful protests... offering up water and other supplies as well as use of the theater's restrooms.

Metrograph is the latest arts-theater space to take part in the growing Open Your Lobby campaign... other neighborhood participants include the Public Theater ... the New York Theatre Workshop ... and Performance Space New York.

For updated lists on NYC protests, you can visit @justiceforgeorgenyc. And you can make a sign today (starting at noon, and they have supplies) at Amy Van Doran's Modern Love Club, 156 First Ave. between Ninth Street and 10th Street.

We are here if you need us 1pm-5pm Water, Snacks, PPE, First Aid, Restroom #openyourlobby #blacklivesmatter