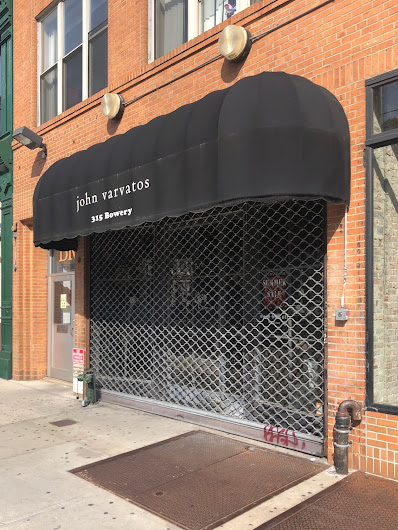 The gate remains down at the John Varvatos outpost at 315 Bowery. The shop between First Street and Second Street has been locked up for the past few weeks.

Bowery watchers are speculating about what might be happening with the address, considered hallowed ground by some for being the home of CBGB from 1973 to 2006.

First, some background on what has been happening with JV, the menswear designer. According to the retailer's website, all of the brand's locations are currently closed. (The Bowery shop returned on July 2, and stayed opened for several weeks.)

As The Wall Street Journal reported on July 24, John Varvatos was in financial trouble long before the COVID-19 pandemic. The business filed for bankruptcy protection on May 6, with a buyout offer from an affiliate of Lion Capital of London and Los Angeles.

(The Journal article also outlines an Equal Pay Act class-action lawsuit that began in 2017 by female sales associates at the retailer. Earlier this year, the sales associates won a jury verdict in an Equal Pay Act class-action lawsuit. "Varvatos denied discrimination. The jury ruled against the retailer, awarding $1.7 million in legal fees, as well as the $3.5 million in damages.")

In late July, WWD reported that a Lion Capital subsidiary was expected to acquire the bankrupt brand and merge it into the AllSaints portfolio. (AllSaints the British fashion retailer, sells menswear, womenswear apparel, footwear and accessories in more than 230 stores.) Varvatos was also rumored to be leaving the company.

John Varvatos opened here in April 2008... the first tenant since the storied music club shut down on Oct. 15, 2006, after a losing a deal to renew the lease with their landlord, the Bowery Residents' Committee.

JV preserved part of the former CBGB space, keeping parts of the wall with sticker and flyers intact and preserved behind glass inside the shop. 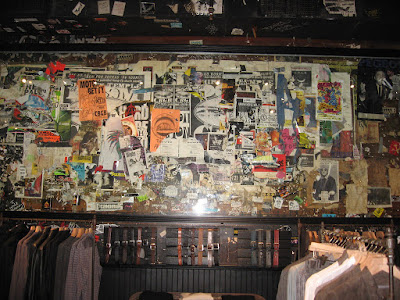 At the time, there was debate about all this. Some were in the "it's-better-than-a-bank-or-a Fuddruckers camp." Others preferred that the old space was gutted rather than turned into a museum alongside $300 Cheap Trick t-shirts. (In 2008, Arturo Vega, creative director for the Ramones, told the Post: "I like it. I'm relieved. We were expecting a drug store in the space. So when I found out it was Varvatos moving in, it was a relief.")

For now, the speculation is on whether JV will ever reopen, and if not, will a AllSaints outpost open in the space, perhaps keeping the CBGB memory alive on the walls?

I had mixed feelings about the JV store. On one hand anything that promotes or in some way preserves the CBs scene is not a bad thing. On the other hand it was a blatant move by JV to latch on to something that was the antithesis mainstream overpriced fashion. ...........in the words of Joe Strummer/ Mick Jones "turning rebellion into money." Indeed.

I don't have mixed feelings about this store. I think it is insanely pretentious and overpriced, which caters to a specific clientele. I am a stylist who freelances in the entertainment industry. I visited this location about a year ago shopping for clothing for actors on a shoot. The henley I was interested in was over 200 dollars. 200 dollars! The half way button down shirt was basic cotton and had five white buttons. A pair of jeans was over five hundred dollars. They were both nice, but the price simply wasn't worth it. And, my producer wouldn't permit me to spend so much on one item. The materials were a meager fraction of the total amount. What customers are paying for is rent on the space and a name. Perhaps people are reconsidering how much they spend and what they spend it on during this pandemic. I am not trying to negate JV or his brand. I admire his legacy. However, unless you are wealthy, how does anyone afford anything in this store? High end retail destinations are going to have a deluge of more issues moving forward. Most of us now have other priorities. Do I want to buy groceries and pay the Con Ed bill or do I wish to buy a new wardrobe and go broke? I don't know how or when this store can open when most of us aren't going out to shop and when crime in our hoods is spiking.

I recently went to a thrift shop store; I browsed the men's clothes section, whereby I snagged me a ($20) John Varvatos light overcoat and a ($5)long sleeve shirt.

I usually go by the thrift shop (or Marshall's) index economy, that if I find a normally luxury or named brand item there, it's usually that that brand name is dying or dead, or no longer relevant or high-end.

On a side note and as an example, I also snagged me a couple of Ben Sherman shirts.

I remember going to this Varvatos store and the Ben Sherman store in SoHo, both of which the staff were snooty and disdainful--Schadenfreude, I suppose. I guess just wait a few years and the high-end will eventually come to low-end.

@9:12- Actually I've known quite a few people in my life who would rather spend money on clothes and cocaine rather than food and utilities. Yes, JV was overpriced. One could get a similar item at Century 21 for $25 that sold at JV for $200. But there are many people who could afford the $200 item and to them it's worth it even if they wear it just once because they think it's makes them feel cooler than everyone else having purchase a name brand at CBs- even though both items were made by the same 12 year old boy in Pakistan or China. And of course no one is forced to buy JVs junk. They do it because they can.

I've been in the store and was happy to see how well the sticker wall was preserved and even heard store employees explaining a bit about the history (as well as why they had to cover the whole thing in glass -- they said people were trying to peel off the stickers until they put it up!)

It felt wrong seeing $500 jeans inside of CBGB for sure. But, JV is a "rock and roll brand" that took the custodianship of the venue as seriously as you could ever hope for. Losing JV means we're rolling the dice with the next tenant and I doubt they'll do as a good a job

This is not about a retail store, CBGB was a cultural epicenter for NYC's 1970's rock and Punk era. As with all eras they pass, cannot not be relived or recreated. Another harsh reality of this city is how historical significant places and buildings are prey to real-estate and a city government who does not have the balls to stand up to it. As the planet is changed over time by the elements ie: wind, water and seismic forces NYC has greed and indifference constantly eroding and erasing our history and our culture.

CBGBs was a cultural epicenter, albeit one that died a slow death 25years, ago but actually there's no need to salvage or restore the club to it's former slummy glory. In fact the club has been preserved in countless recordings, videos, and books. That's more than enough for me. Turning it into some sort of museum with selling t-shirts in a gift shop would be the worse outcome possible.

Can CBGB’s come back? 😭 I miss going there so much! It makes me sad that new people to New York will never get to experience it

Nobody loves rock and roll more than me, and I say bring on the Fuddrucker's. Let CBGB RIP IMO.

America's answer to the passing of CBGB was Hard Rock Cafe. The few months after its closing would have been the time to time capsule this place, and create a small museum.

I was relieved when JV moved it because the space retained some of the CB's elements (stickers, rafters). I enjoy walking in from time to time to just browse and check the place out. Of course I'd never buy anything. The clothes are way to expensive. The vinyl is over-priced. But it is fun to be there. Also, a few years back, I saw my favorite band play a free fan-club show there (Gaslight Anthem). Jesse Malin opened. If it closes, it closes. Nothing lasts forever in this city.

Even if it came back, it would be nothing like it was in their heyday. I used to go to every Sunday Matinee, and was sometimes there 2 or 3 times per week in the 90s. It was the best club ever, and nothing will ever be like it again.

When Hilly's finances were tanked and it seemed CBGB would be lost, there was a movement to have CBGB officially landmarked, so it might have a future as a venue and tourist attraction. Unfortunately this movement was unsuccessful.

Mayor Bloomberg himself put the kabbosh on it. He had some asinine comment at the time about how it wasn't the kind of place where he and his well-to-do buddies would ever want to hang out, plus the Bowery real estate was valuable on its own, therefore the historic club didn't deserve landmark status.

So the city went ahead and landmarked a former dog biscuit factory-turned-city-storage warehouse on one of the side streets instead. Dog biscuit fans the world over rejoiced.

@5:13- There was a rent dispute between CBs and the landlord (Bowery Residents Committee) that led to it's demise. Bloomberg's comment,even if true, has no bearing on the NYC LPC to designate landmark status on a building. A dive bar with a couple of smelly toilets doesn't qualify. The fact is CBs was just one venue in a much bigger social scene at that time. To really due that era justice one would would have to preserve the Palladium, Club 82, Berlin and the Jefferson as well as the basement sex clubs, 12 St prostitutes and open air drug scene.

this was a fun store to go in and look around. the vintage stereos and speakers and albums in the front was my favorite area. drum set up in the back. part of the old stickered wall preserved. i never once considered buying any of that fake rocker clothing.

punk (as a look, as music, not as an attitude) has been dead since the late 70s, and CB's been gone for longer than i remember. everything changes. i don't cry about it.