The Walgreens on Astor Place closes at the end of August 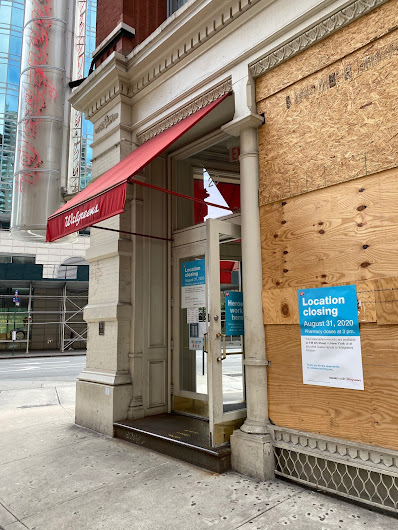 The Walgreens location on Astor Place at Lafayette is closing at the end of the month... signs are now up on the plywood outside announcing Aug. 31 as the last day in business... 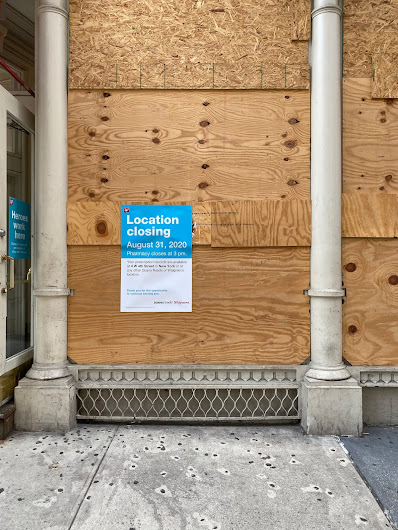 Walgreens is transferring prescriptions to nearby stores — in this case one on West Fourth Street.

Last August, Walgreens announced that it was closing nearly 200 U.S. locations, including its Duane Reade brand, as part of a sweeping $1.5-billion cost-cutting measure.

With that, three neighborhood Duane Reade by Walgreens locations have closed in recent months. The outpost on Avenue D at Houston and First Avenue between 14th Street and 15th Street shuttered last November while the storefront on 10th Street and Third Avenue shut down in early March.

The Astor Place Walgreens had been looted in early June along with other businesses along this corridor.

Thank you to Vinny & O for the photos and tip!

Hmm. That corner seems like it’d be a good place for a wine store.

It was Astor wines before, I assume that’s the joke?

Another casualty of Cuomo and Deblasio's policies

CVS and K-Mart nearby make it a little redundant but losing pharmacies during a pandemic is not great.

Anon at 11:06. Funny you mention that. I bought a boxed cosmetic item there that was missing its key ingredient. The person in charge accused me of stealing it when I went to make an exchange. Even an email to corporate didn't garner a response. Hope something nice fills that space. I miss the Astor Wine/Barnes and Noble corner.