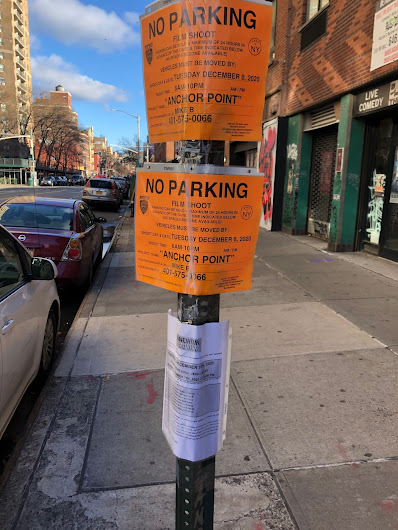 You've likely seen the signs around Avenue A and some side streets for something called "Anchor Point," which is actually the working title of "Hawkeye" ... the new series for Disney+ based on the Marvel Comics character of the same name.
As I cut-n-paste from the Internet: "It is set in the Marvel Cinematic Universe, sharing continuity with the films of the franchise. The series takes place after the events of the film 'Avengers: Endgame.'"
Anyway, it promises to be a big shoot tomorrow... with production vehicles expected on an array of side streets... from Fourth Street to 10th Street and First Avenue to Avenue C... check out the streets on the posted move-your-vehicles notices... 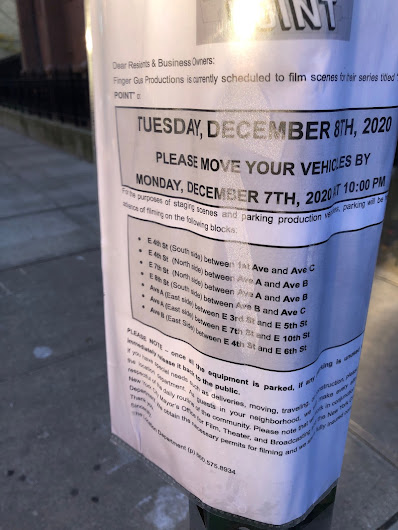 Ahead of the shoot, the Half Gallery on Fourth Street and Avenue B has been transformed into an old-time heating-appliance store, as these photos by Stacie Joy show... (and this prompted some confusion among residents, a few who tried to enter the fake storefront...) 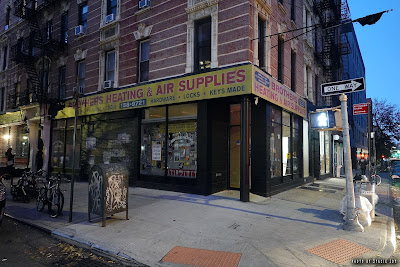 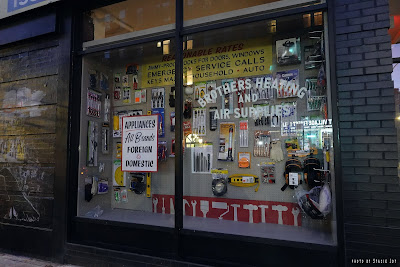 There was some filming in downtown Brooklyn last week. The cast reportedly includes Hailee Steinfeld, Alaqua Cox, Tony Dalton, Vera Farmiga, Florence Pugh and Jeremy Renner.
And this is not the first time a Marvel series has been filmed in the East Village. Flashback time.
Posted by Grieve at 11:00 AM

I'd love to be a designer making all these store signs for films. Sad that they come down so quickly but they live on in the films.

Recently watched "The Goldfinch" for which they transformed "Via della Pace" (now completely destroyed AGAIN by the fire on 7th. RIP) into an antiques store. Including signage and a beautiful logo on the entrance door, which the owner of della Pace left on the door because it was so pretty.

Everyone loves to complain about shoots taking parking but remember the film industry provides thousands of well paying jobs with amazing benefits not to mention millions in taxes to the city so get over it.

No one was complaining.

> Everyone loves to complain about shoots taking parking but remember the film industry provides thousands of well paying jobs with amazing benefits not to mention millions in taxes to the city so get over it.

No one was complaining as Grieve said, but if you really want to talk about the pros/cons of the film industry it's got nothing to do with missing parking spots. There's a whole bucket of negative things that still perpetuate within that industry and Disney is behind a lot of items at the top of the list.

I was one of those who were fooled by the heating appliance storefront. I was thinking about how wonderful it is that some people are able to to start a local business during these awful times!

Was totally confused going to grab a coffee early this morning. This crew is impressive. All of this went up overnight and didn't make a sound. Also super friendly and accommodating to everyone walking around while setting up.
Would also like to thank them for fair warning on parking. I only get super annoyed about it when you get a day or less of a warning. Come back anytime marvel

My favorite film set was the transformation of St Mark's for the Marvelous Mrs Maisel. The storefronts and cars were magical.

I just meant in general I do heat many complaints but your are right!

@ 11:17 AM
Hey, at least we still have the psychedelic 60's mural on the Conelia Connelly parking lot wall from the shoot they did there some years ago. (some Michael Mann 70's cop thing maybe?). The mural has even been re-touched up over the years. Funny that it's just part of a film set.

I also remember walking by TSP one day and seeing that fountain they built for the Die Hard movie.
There was no filming going on or anything, and I was totally oblivious and just thought, "WOW! Look at the beautiful fountain the city has built in our park!"

No offense to the art gallery, but I also thought the hardware store was real and got very excited about having a new business nearby that is actually useful!