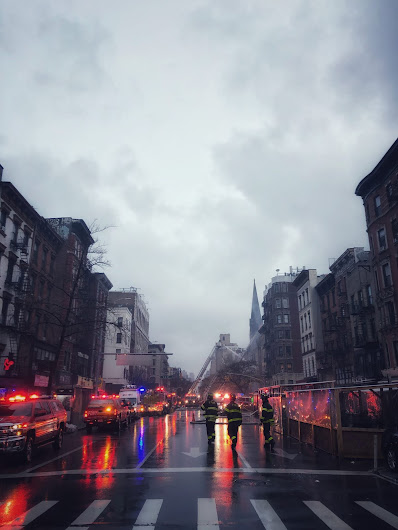 The early morning fire on Saturday that destroyed the vacant 48 E. Seventh St. and neighboring Middle Collegiate Church at 112 Second Ave. made international headlines (BBC here, for instance).
Workers have started demolishing No. 48 (one source at the scene said they'd remove what's left of the 5-story building, bringing it down to two levels so FDNY officials could continue their investigation to the cause of the fire).
Meanwhile, officials were examining the historic church's façade to see what might be salvageable.

Happening now! Assessment of the @middlechurch facade structure and possibility of saving it. @evgrieve pic.twitter.com/hmJe5FlW9n

Hopefully we will learn more about the fate of the structure in the hours/days ahead.
Meanwhile, the Times provided a thorough piece on the history of Middle Collegiate Church, which was built here in 1892. A fact that surprised some people: The church houses the New York Liberty Bell, which dates to 1725. No word on the fate of the bell.
A few other select headlines:
• NPR has an interview with Rev. Jacqui Lewis, senior minister at Middle Church.
• CBS 2 covers the church's virtual service yesterday. (Middle Church has not had an in-person service since before the pandemic.)
• Gothamist provides an update on the Hopper House, the shelter operated by the Women's Prison Association at 110 Second Ave. that had to be evacuated. (Find our post on this here.)
There will be multiple storylines continuing to emerge from this tragic fire. We'll continue to provide updates on the latest developments.
Thank you to everyone who has shared photos from the scene. And as many people have said, the fire brought back awful memories from the deadly explosion that leveled 119-123 Second Ave. in March 2015.

For some people watching the fire on the SE corner of 2nd Avenue & 7th Street this morning, there were unpleasant flashbacks to March 26, 2015, when the gas explosion wiped out the NW corner. 2 men died there that day.

It is very lucky no one was injured. But, there is much work to do. I know a lot of people made donations to the shelter on 10th to help the evacuated women (and others), but, that needs to be ongoing and housing is needed.